During my 2003 visit to Cuba, the entire group quickly grew tired of the catchy, ubiquitous song "Guantanamara," to the point that we considered implementing a fine for involuntary humming of the song by group members. I might have felt differently had I understood the political significance of the song, but probably not: it is the ultimate earworm. 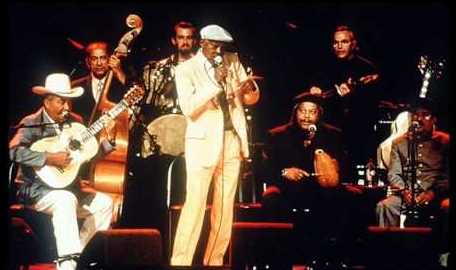 The opening chords of "Chan Chan" evoked no such response. We heard it almost as often, and I certainly never tired of it. A decade later, it always takes me on a brief mental journey back to Havana. The song is a romantic -- even somewhat ribald -- example of Cuban son, a style introduced to many North American audiences (including me) by Ry Cooder's Buena Vista Social Club project.

As much as I associate the song with Havana -- because it was recorded there -- the song itself is set in the eastern province of Holguín, coincidentally home to Fidel and Raul Castro. It evokes a day of traveling from three small towns in the hills down to the beach town of Mayari.

Enjoy more music and landscapes in this video set to "El Carretero" -- another song in the Buena Vista Social Club repertoire. I enjoy it because it captures parts of the ride I took from Havana to Trinidad in 2003.

Posted by James Hayes-Bohanan at 3:07 PM No comments:

Yesterday I noticed that Bill Moyers -- one of my favorite Baptists -- had interviewed Junot Díaz -- the only Pulitzer-prize winner I have met. I was immediately drawn to the conversation, both by the great integrity and intellectual rigor that these public intellectuals share and by the sharply different style they each bring to conversation.

Even before the interview itself, I was rewarded in the opening snippet by a reference to libraries and librarians. As I was reminded later in the interview, Díaz remembers an early childhood in the Dominican Republic without libraries, where a Bible might be seen, but where he had never seen two books together. For this future writer, one of the greatest gifts of coming to America was his immediate introduction to the local library. (It is appropriate that it was my wife the librarian who made it possible for my students and me to meet Professor Díaz a couple of years ago.)


Moyers & Company Show 151: Rewriting the Story of America from BillMoyers.com on Vimeo.

Speaking for a full hour, six weeks after the re-election of Barack Obama, Díaz and Moyers have had time to think carefully about what the election might mean as a marker of a country undergoing profound change.

“There is an enormous gap between the way the country presents itself and imagines itself and projects itself, and the reality of this country,” Díaz tells Moyers. “Whether we're talking about the Latino community in North Carolina, a whole new progressive generation of Cuban Americans in Florida, a very out queer community across the United States, or an enormous body of young voters who are either ignored or pandered to, I think we're having a new country emerging that's been in the making for a long time, and that I think for the first time is revealing itself more fully to the entire country.”

He shares with me an reluctance to apply the word "conservative" to the Republican party as it currently operates at the national level. He explains the difficulty more deftly than I could and more brazenly than I would. “Wouldn’t it be nice to have a real conservative party in this country for once?” he asks. Instead, what the GOP currently offers is a “shelter for a lot of messed-up and toxic paradigms.”

What needs to happen is not easy, he admits, but needs to be done. He tells Moyers that it is "much harder than we ever gave it credit for to really embrace a country like this one, a country that is so dynamic and so diverse at all different levels.”

What is needed, he insists, is genuine conversation, and he and Moyers provide a rich example, and one that is not limited to the election itself. The conversation ranges from surprising differences in the racial dynamics of Hollywood and Wall Street, for example, to the importance of reading Moby Dick and the travesty of student-loan debt.

Those who find this conversation as compelling as I did may wish to hear his conversation with another great interviewer, as he spoke with Tom Ashbrook about the profound lessons of disaster in Haiti.
Posted by James Hayes-Bohanan at 12:24 AM No comments:

I have been interested in the music of Latin America for more than a decade, and have incorporated some of the rich variety of the region's music in my teaching and outreach.

My very first exposure to the musical traditions of Brazil and Cuba was even earlier, through the production work of David Byrne at Luaka Bop. My interest really grew through  friends and colleagues who shared their favorite music during my visits to Latin America, Once I started listening to these songs (mainly on CDs), I started to make connections. I must confess, though, that my seven years in the border area were wasted, musically speaking, as I did not even attempt to understand Tejano or Conjunto music until I moved north.

I continue to appreciate the incredible variety of music from Latin America, but must admit that my pursuit of coffee, tea, and now chocolate have distracted me a bit in recent years, so that my Musica web pages have experienced a bit of neglect.

This is where Alt.Latino comes in. I first started hearing about it a few months ago, around the edges of my habitual NPR listening and reading. When I decided to fluff up my pages this week, I decided to have a look around, and I was richly rewarded. Hosts Jasmine Garsd and Felix Contreras have put a name to a pattern I had started to notice but could not articulate: From them I have realized that Latin Alternative is a way to describe many of the musics to which I was being drawn.

Like the music, the program seems to be evolving, from its chance beginnings near the NPR vending machines, into a major force with several different manifestations, including hour-long produced shows, blog posts, various social-media and spots on other NPR programs. It also has a continues internet radio stream. As I browsed through the weekly shows, the first I found was an interview with Manu Chao, whose Clandestino CD each member of my family has memorized to varying degrees.

The wide-ranging interview is a genuine treat, mixing insights about politics and art with samples of his work and the work of others whose music he enjoys. It was my first encounter with the song "Me gustas tu," a silly and catchy tune that is as close to pop as I've heard him. As with many of his songs, the "VIDEO OFFICIAL" version is a visual feast, and the best way to enjoy the music. This track is from the Proxima Estacion: Esperanza (Next Station: Hope) CD. On my first perusal, I noticed many songs that sample his own earlier works.

On YouTube, it was not difficult to find an unofficial version of the song with printed lyrics (albeit with a few typos). For those learning a language, such videos are a real blessing.

More about my own thoughts on Manu Chao and some similar artists is on my Musica - Eclectic page. 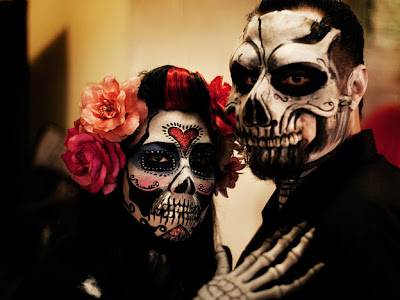 ¡Que Miedo! was the Halloween 2012 episode of the program, which explored the intersection of folklore and contemporary Latin music, including sexy horror that predates Twilight. The discussion includes, of course, both the chupacabras and various versions of the La Llorona tale. The Chavela Vargas version they play is used in a popular Frida Kahlo tribute video; my 2010 La Llorona post includes two other variations -- a spoken-word reading and television advertisement.