I found a recent installment of the BBC radio program HARDtalk to be uncharacteristically uplifting. In a rebroadcast of a segment that originally aired in July 2020, Dr. Jane Goodall did discuss some hard truths, but she also offered listeners hope of a way forward in this most dismal year.

I am sharing this interview with students in several of my courses because she explains the importance of connecting environmental protection with human rights and she describes exactly how that connection is made: by listening to the people most directly involved. She carries out this work with communities and individuals worldwide through two organizations -- the think tank/foundation Jane Goodall Institute and the youth movement Roots and Shoots.

More specifically, I am sharing this with students in my coffee classes because one of her many projects involves a cooperative of coffee farmers near the Gombe National Park, as the site of her original field work is now known. I first learned of the project when Gombe Reserve Coffee was being sold by Green Mountain Coffee. Jane Goodall continues to work with the Kanyovu Coffee Cooperative Society, a consortium of 12 coffee collectives representing 7,600 farmers near the park. Because sustainable coffee farming is a form of agroforestry, it can provide a critical buffer in areas adjacent to protected parks such as Gombe. Since the partnership with Green Mountain Coffee ended, I have not been able to find this coffee at a retail level, but the Goodall Institute and US-AID both continue to support the work of these growers.

I was lucky enough to be in a room with Dr. Goodall just once, when she was kind enough to accept the first Atlas Award from the American Association of Geographers in 2010. This award is given by our national organization to a person who advances the values of geography but who does not identify primarily as a geographer. The HARDtalk interview reveals an interesting connection between geography and her work as an anthropologist: at a pivotal moment early in her studies in Gombe, National Geographic decided to report on her work. In the 2010 article Being Jane Goodall, the magazine reflects on the the first half century of her remarkable career. (This link is for NatGeo members only, but the article is available through most libraries.)

January 2022 Update: Amid much sad news at the new year -- including the death of E.O. Wilson -- a BBC interview with Jane Goodall was a bright spot. Her discussion with BBC's Climate Editor Justin Rowlatt is a thorough exploration of Lessons from the forest for climate change. It is a great example of the kind of geographic thinking we need at this crossroads in the life of our planet.

Thinking about Jane Goodall's embrace of local communities as an integral part of her environmental work reminds me of another example of a prominent scientist who partners with local experts. In my 2017 post Good News from Gorongosa, I introduce a wonderful documentary about the relationship between Tonga Torcida, a young man in a part of Mozambique that has been inhabited for 300,000 years and the imminent biologist E.O. Wilson.

Posted by James Hayes-Bohanan at 8:12 AM No comments:

Perhaps the most profane guest lecturer I ever brought to campus was James Howard Kunstler, author of The Long Emergency. I qualify this with "perhaps" because I also helped to bring Junot Díaz to campus. Kunstler is certainly the more curmudgeonly of the two: a professional pessimist for whom dire predictions are a moral imperative. It is as if we were stepping off a curb in front of a fast-moving bus, and he is trying to push us out of its path with books, lectures, and profanity-laden blog posts.

I was reminded of this by a recent story from Bloomberg. In Toxic Spills in Venezuela Offer a Bleak Vision of the End of Oil, journalists Fabiola Zerpa, Peter Millard, and Andrew Rosati describe the multiple environmental catastrophes that are accompanying the financial collapse of what was once a leading national petroleum industry.

As the article describes in detail, the demise of petroleum in Venezuela is following a path that is not likely to play out in other producing areas. It is, after all, failing to refine oil while it still has plenty. Most other oil fields -- and the global oil field as a whole -- will not run aground financially until reserves are proportionally much scarcer than they are in Venezuela at the moment.

But the tale is a cautionary one for another reason: it is difficult enough to get polluters to take financial responsibility for the havoc they cause while they are profitable. It is much more difficult when they have run out of money. It is for this reason that regulatory programs such as RCRA in the United States require industries to show strong financial reserves as part of any process of permitting potentially polluting facilities.

As oil reserves dwindle worldwide -- and all of them will -- abandoned fields and infrastructure will require close scrutiny. Unfortunately, many of the costs of our oil addiction are likely to be borne by generations who do not enjoy the benefits.

Posted by James Hayes-Bohanan at 11:00 AM No comments:

Where is Latin America exactly, and why is it called that?

What causes deforestation in the Amazon, and why does it matter?

What do migration patterns have to do with the price of coffee?

How is land connected to political upheaval in the region?

How does climate change affect Latin America, and how are people responding?

What can we learn about Latin America from its music?

GEOG 381 is Latin America: Globalization & Cohesion
Tuesdays 11:00am-12:15pm
In the spring 2021 semester it is offered fully online, partly synchronous. This is a complicated way to say that we will have one Zoom meeting a week, with students working independently otherwise.

International development amid the diverse global cultures of Latin America and the Caribbean is considered as globalization is balanced with local identities from the Rio Grande to Tierra del Fuego. Common themes that define the region are contrasted with unique developments at national and local scales.

I became a Latin Americanist geographer because of one of the problems mentioned above: Amazon deforestation. As I learned more about the region -- eventually earning a doctoral minor in Latin American Area Studies -- I have become enamored of its many cultures, climates, and landscapes. I have had the good fortune of visiting all the countries shown in green below -- returning many times to Brazil, Mexico, and Nicaragua. I also lived for seven years in the Borderlands of Arizona and Texas, which should be included in any discussion of the region.
For more ideas related to this course, please explore the posts I have labeled GEOG381 in this blog. 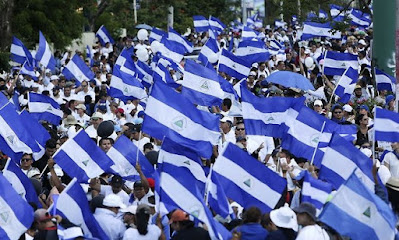 Photo Notes
I struggled to find a photo to illustrate this blog post -- even my own modest experience in Latin America has been quite varied. I have been hot, cold, high, low, wet, and dry. I have seen beautiful and occasionally terrible things. I have met so many wonderful people. I compulsively take photos, and each of the thousands I have taken (or have been taken of me) tells a different story.
At the top of this page is a photo my spouse (who is a BSU librarian and Spanish professor) took during our July 2019 visit to Chile and Argentina to view a total eclipse of the sun. We learned why people make such a big deal out of those journeys. Traveling as two Latin Americanists made our travel to view the eclipse a very rich experience, as we could do so independently and appreciate many things about the people and places we traversed.
The BR-364 photo is one that I did not take; I found it on a Facebook group called Rondônia, Minha Querida Rondônia. Like many groups, it features nostalgic photos of a particular place, in this case the Brazilian state where I did my dissertation research in 1996 and to which I returned in 2000, 2003, and 2019. The phrase "minha querida" means "my dear" and it signifies the affection many people feel for their home state, despite it being a place I chose to research specifically because of its many problems. The muddy road BR-364 (usually called Três-Meia-Quatro) is at the heart of thousands of migration stories and one of the world's most severe and prolonged episodes of deforestation. The story behind this photo will occupy about two weeks of our course, and will touch on many aspects of the geography of an entire region.
The final photo -- the sea of flags -- was taken in the spring of 2018 in Nicaragua, not by me. I led study tours in Nicaragua almost every year from 2006 to 2018, almost always in January. In April of 2018, politics in the country took a very dark turn, which I describe in a series of posts tagged #SOSNicaragua -- a hashtag that is also on the back of my car to this day. Although this looks like an ordinary photograph, to understand the photo and the reactions to it is to understand a complicated story of political geography that stretches back decades.
Posted by James Hayes-Bohanan at 12:30 PM No comments: