It was while making a simple dinner that I heard a wonderful interview about food and simplicity that explains a lot about what is wrong with modern food systems. The fact that our food has a system should be cause enough for alarm; this interview puts the problem in specific terms.

The interview was on this week's episode of America's Test Kitchen, which is rapidly becoming one of my favorite radio programs. The episode is entitled "The Dorito Effect: The New Science of Creating Potent Flavor Chemicals to Market Bland Supermarket Foods" and it worth downloading it from the program's rather clumsy web site. 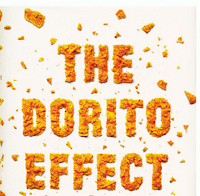 Drawing on evolutionary biology and chemistry, author Mark Schatzker explains the importance of flavor in food, the reasons non-food food "needs" artificial flavor, and the problems that is causing for our health.

(To understand my quirky title, you need to listen to the full interview.)

Spoiler alert: he ends the interview with the observation that "The path to better health is through better-tasting food."  This reminds me very much of the last line of my own recent TED Talk on the future of coffee.

Lagniappe
Apparently to download a segment from America's Test Kitchen, you have to download the entire episode. But to do so is a treat. In addition to the main story on flavoring, there is a wonderful story about Iceland, which includes some fascinating insights on the geography of food in general and of coffee in particular.

Posted by James Hayes-Bohanan at 6:25 PM No comments: 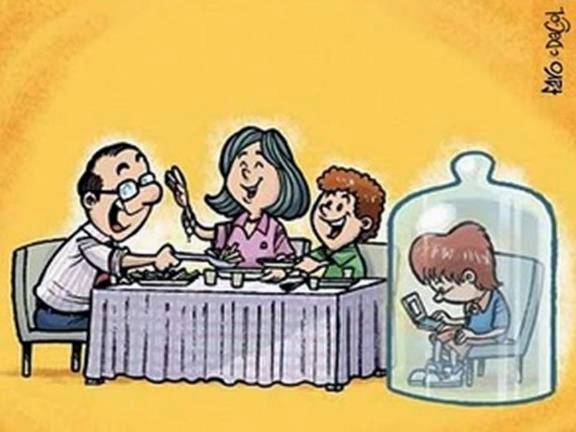 When I took typing in high school, I could never have imagined that such a quasi-scholarly activity would eventually become a threat to learning, never mind a sometimes lethal pursuit. After all,typing class and driving class were in different parts of the building, and we never thought of doing both at the same time.

Of course, in 1979 a typewriter weighed more than a bowling ball and was just as smart. It had no information, aside from what we were putting in it ourselves, and that remained only until we got to the bottom of  a page. So we could not be distracted by a typewriter.

Of course, "typing" on a phone, tablet, or laptop is now a completely different activity, because it creates instantaneous connections to other people, information, or entertainment. The quantity of connections is vast, and the ability to switch from one to another to another is instantaneous.
Posted by James Hayes-Bohanan at 9:32 AM No comments:

NOTE: My use of the word "saint" in the title of this post is a personal expression of my sentiments regarding Oscar Romero. He is not yet considered a saint, though he was declared a martyr this February and was beatified (declared "blessed") last weekend. These are steps on the way to sainthood.

I will be showing Romero in the first session of my Geography of Latin America course tomorrow. Normally, I would reserve this for a bit later in the course, after we have had time for "scaffolding" so that the students know more of the context.

But Oscar Romero has been very much in the news over the past several days, and this news has particular resonance with our region of greater Boston, and with our university in particular. So we will begin our study of Latin America with this story, tragic as it is. 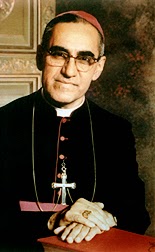 I have written about the martyred archbishop elsewhere on this blog, most notably on the occasion of President Obama's 2011 visit to El Salvador, which was a Lost Opportunity to speak against the atrocities of that period. Since then, our president has actually re-employed some of the Reagan-era facilitators of those crimes.

NPR has followed the story of Romero's beatification with a number of excellent reports. On Morning Edition of May 25, Carrie Kahn examines the rifts that continue within the Salvadoran church, while Renee Montagne and John Allen of the Boston Globe explain the emergence of liberation theology more broadly. Contrary to popular belief, Pope Francis was not a supporter of that movement when he himself was a bishop in Argentina, where his alignment within a similarly divided church was a cause for concern when his papacy was being considered. Carrie Kahn explores the Romero story further in an excellent interview with Scott Simon.

In Sunday's paper, the Globe's Evan Allen further explains the importance or Romero's beatification in the Salvadoran community of East Boston. Those connections have a lot to do with the tireless work of Rep. Joseph Moakley -- for whom the Moakley Center on our campus is named -- on behalf of Salvadoran refugees and migrants, and his role in ending Reagan's wars in the region. The Moakley Institute at Suffolk University maintains papers that cover that important work, and the late Congressman explains his work in El Congresista, a short documentary produced by the institute.

September 2020 note: During that period, a lot of the domestic support of those refugees was coordinated by the director of Rep. Moakley's Boston office, Bridgewater State alumnus Fred Clark, who is now the president of our university.
Posted by James Hayes-Bohanan at 1:55 PM No comments: 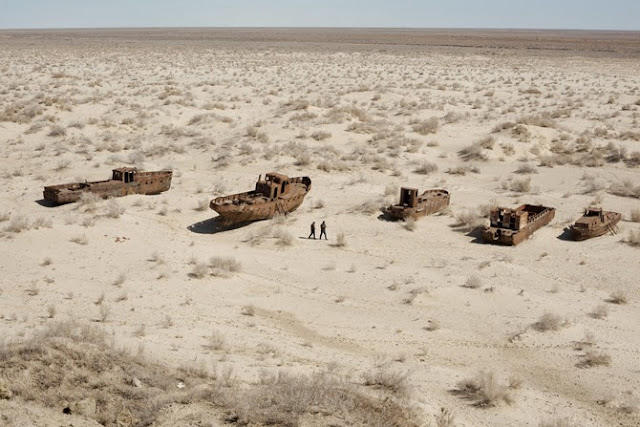 Yes, those are two men walking in the desert and yes, they are walking past a fishing fleet. The nearest water is miles away, and it is toxic to fish. For years, I have thought that images such as this were the most distressing indications of one of the world's greatest environmental calamities -- the loss of the fourth-largest inland sea on the planet.

Sadly, the current issue of National Geographic describes a post-Aral hellscape that is worse than I realized. Waters divided among five nations and controlled by a sixth (the former USSR) have disappeared. I knew that this was a story of drought, greed, and dust. But it is also a story of oil, vodka, poison, and even slavery.
Posted by James Hayes-Bohanan at 7:48 PM No comments:

The earth is about 8,000 miles in diameter and is sheathed by a comparatively very thin layer  of fluids that are critical to the balance of energy. As I tell students, without the oceans and atmosphere, the equatorial regions would be getting hotter and hotter while the poles got colder and colder. The equator is hotter than the poles, of course, but not hotter and hotter.

This image was captured at 7am on Thursday, May 14. The lines show wind direction at the surface, indicating the importance of flows toward and away from coastlines. The colors indicate temperature and show the importance of continentality. At this early hour of the day, land masses remain cooler than the oceans, and high elevations are cooler than low.

This image is from a project known as Natural Earth, an artistic rendering of winds or currents overlaid on data about speed, temperature, or pressure. From the very simple main page, click on the word "earth" for a menu of options that include mapping high-altitude winds or shifting backward or forward in time.
Whatever parameters you choose, the flowing map reveals patterns that are both beautiful and informative.

Posted by James Hayes-Bohanan at 8:12 AM No comments:

Of course I did not choose my birthday, but if I could have, I would have. I have come to regard May 4 as a special feature. For many years, I considered it a highly inconvenient time for an academic person to be born, the celebration coming as it does, just in time for final papers and exams each year.

In recent years, however, I've decided that the birthday -- and the wedding anniversary that follows it by less than a week -- are opportunities to bring a little balance to academic life, which otherwise runs pretty much around the clock this time of year, except during the early morning coffee hour and the early evening dinner hour. So we took the weekend off from academic work and did some cooking, walking, theater-going, and of course blogging.

I almost never think of my birthday without thinking of the terrible events that took place the day I turned seven, though I was only vaguely aware of them at the time.

Because it took place on my birthday and because I have spent my entire adult life on college campuses, I have given the events of that day a lot of thought. I have an investigative book published by a religious denomination in 1973 and have seen the 1981 television movie several times.

Only this year did I learn that students protesting the same thing -- Nixon's invasion of Cambodia -- were gunned down less than two weeks later at Jackson State University.

I also learned that in the days between those two assaults, the president has spent a morning trying -- in his own enigmatic way -- to connect with the young people he had so alienated. It was early in  the morning of May 9 -- which seventeen later would be our wedding day -- that Nixon took a young man on his staff to the grounds of the Lincoln Memorial. As the sun came up, he chatted informally and awkwardly with the young people he found there. This very odd encounter is the subject of a short documentary about our most enigmatic president.

At our house, birthdays are about small indulgences. This year that turned out to be a dinner of savory crepes followed by dessert crepes. I  cooked my own dinner, because I enjoy everything about this dinner, which happens to have been the first one I ever made for Pam, back on Hooper Avenue three decades ago. This time the wine was better.

And after that we celebrated a much more pleasant coincidence. I share my birthday with
Miss. Audrey. Hepburn.


She was witty and pretty, of course, but much more: a brave humanitarian.
Lagniappe
I watched the original Star Wars when it was in theaters (my first date), but it was years before I realized that the film kept mentioning my birthday. 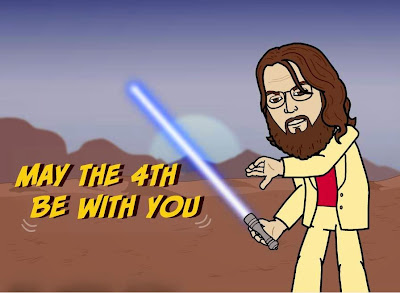 Posted by James Hayes-Bohanan at 3:07 PM No comments:

The Responsibility of Privilege

During Krista Tippett's conversation with the wise young composer Mohammed Fairouz on her program On Being, I heard a remarkable excerpt from one of the last speeches given by John F. Kennedy.

The entire speech is worth listening to, despite the pervasive use of the word "man" for "person" that is sadly a constant even among the most progressive discourses of the era.

The passage that caught my ear starts at about 11:50 in this clip, in which the president says that in a democratic society:


The highest duty of the writer, the composer, the artist is to remain true to himself and to let the chips fall where they may. In serving his vision of the truth, the artist best serves his nation.

It is worth listening to the entire speech, however, because his words were not limited to the importance of artistic expression.

He did not know, of course, that this would be one of his last opportunities to speak to the public. He did know, however, that in speaking to an audience of the elites and the children of the elites, it was important to address the questions of privilege and the responsibilities it requires. He spoke both of inherited wealth and inherited poverty. Would that he could return to Washington with that message today.
Posted by James Hayes-Bohanan at 8:01 AM No comments: