It is time to propose one-credit honors colloquia for next fall, and I was beginning to think that my next topic should be Detroit, with a focus on the role of the arts in the social and economic development of the city. My kid -- an accomplished artist and honorary geographer -- had introduced me to the importance of this question a few years ago, with a brilliant paper in response to the proposed liquidation of some of the city's great museum collections.

The decision was made for me just now, by an instructive review of Detroit's proto-punk scene on PRI's Studio 360. As part of its American Icon series, journalist Pedro Rafael Rosado makes a convincing case for the pivotal importance of the 1962 one-hit wonder 96 Tears by Question Mark and the Mysterians.

Posted by James Hayes-Bohanan at 11:09 AM No comments:

Why Invest in Disemployment? 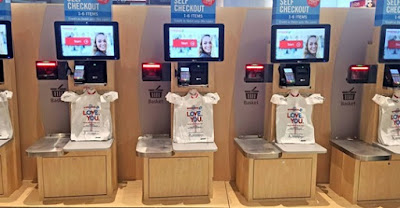 These machines are loud and unreliable, and provide evidence in support of my contention that all work involves skill and should be valued. Humans who oversee little clusters of these develop even higher-level skills, but I doubt they are compensated accordingly. I would not last an hour trying to help customers use these things.

Additionally, they rely too much on plastic bags, just as we are making some progress in getting rid of them.
Posted by James Hayes-Bohanan at 10:35 PM No comments:

I am spending this week in Porto Velho, the capital of the Brazilian state of Rondônia, where I did research for my dissertation in 1996. At that time, and during subsequent research visits in 2000 and 2003, the problem of deforestation was framed primarily in terms of land-use change. As I return, the same problem is -- rightly -- viewed through the lens of climate change.

Even when traveling, I often listen to WBUR in Boston, and this afternoon it brought me this excellent reporting on a story I have been following very closely since the summer of 2016. Journalist Rebecca Hersher examines the costs of two catastrophic floods in Ellicott City -- July 30, 2016 and May 27, 2018 -- in terms of personal relationships within a close-knit community that has great personal significance for me.


As the reporting indicates, even though they may disagree on the most appropriate ways to respond to the flooding, town residents acknowledge that climate change makes further severe flooding inevitable. The story briefly and obliquely alludes to land-use change as an additional factor; I discussed this in some detail in some of my previous posts about these floods.

Flood Flash -- July 31, 2016 -- my initial post about the first of the two floods mentioned in today's reporting. We had enjoyed a visit to Ellicott City just a week before this flood. This post explains why it was unprecedented, even for a town with a history of memorable floods.

Burying the Survivors -- September 1, 2018 -- in which I indicate which remedy I oppose.

Two posts from well before these floods, merely reveling in the charm that is Ellicott City:


Posted by James Hayes-Bohanan at 8:23 PM No comments: