I remember this riddle from middle school days -- "If a plane crashes on the U.S.-Canada border, where would they bury the survivors?" The punchline, of course, is that you don't bury survivors.

I was reminded of this when reading Ambitious Ellicott City flood prevention plan would tear down 19 buildings in historic downtown, by Baltimore Sun journalists Sarah Meehan and Jess Nocera. The headline is an accurate summary of what Howard County officials have proposed in response to the devastating floods of July 2016 (see my Flood Flash and and Flood Peak articles) and May 2018 (Flooding: It's Not in the Cards).

The headline hints at some of the problems with the response of county officials. The plan is indeed ambitious, in the way that Al Capone was ambitious at banks: it contemplates obliterating the victims. The financial cost to be paid by the county would be high, but the businesses that have rebuilt in the "flood zone" would not survive in new locations. They thrive because of the "sense of place" to which they have contributed for years or decades.

The plan announcement seeks to downplay the impact of the demolition by pointing out that 5 percent of the historic district would be affected, and this map with much less than 1 percent in red reinforces (and exaggerates) that message. Everyone who cares about the place, however, knows that this is the most important road segment on the map, or indeed in the entire county. 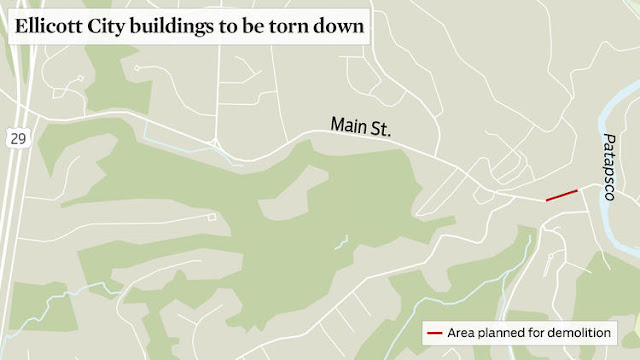 Moreover, the removal of buildings in the path of the flood waters will not "prevent" flooding. As detailed in the Preservation Maryland Statement on Ellicott City Demolition Proposal, the county's plan merely moves victims out of the way but does not even include study of the radically altered upstream hydrology that has driven the floods.
The story is a reminder that climate change is leaving less room for error in many of our decisions about the environment. In this case, decisions about land use that would normally have made flooding quantitatively worse are now making it qualitatively worse -- a threshold has been crossed into an entirely new type of flood risk.

I have to admit that -- like many people from this part of Maryland -- I take the woes of Ellicott City personally. I have been a customer in most of the buildings slated for demolition, and my favorite librarian and I bought wedding gifts for each other in Discoveries.

Posted by James Hayes-Bohanan at 9:47 AM