While contemplating a good way to wrap up my course on the geography of Latin America, I was fortunate enough to hear this bit of radio journalism.

I thought I recognized the photographer's name and I was even more certain that I recognized her focus on indigenous people as her favored subjects at a certain point in her career.

Indeed, this was the photographer I was thinking of, and I had posted an article about the work of Graciela Iturbide in this space early in 2019. I wrote Mexico Contrasts, In Black & White based on a NYT article before I even went to her exhibit at the Museum of Fine Arts in Boston. (Search the MFA site for her name to see a lot of related stories.)

It was also in early 2019 that I learned of a Frida Kahlo exhibit that was coming to MFA in the same season and some new scholarship around her life and work. I wrote about this at the time in Frida La Pared.

I did not write much about the exhibit itself, but at the time I did post this sign that I had found just outside the gallery.

I have seen a lot of bilingual signage in museums, but I do not think I have ever seen a bilingual sign about bilingual signs. Attention was being called to their use because they were the first such signs used in MFA since it opened in 1876. A Juneteenth 2019 story on WGBH reminds me that this was during a time of controversy and introspection about race and access in the museum.

Those reading this post now (April 26, 2022) might have an opportunity to visit the Immersive Frida exhibit in Boston or in another city.

Posted by James Hayes-Bohanan at 3:53 PM No comments:

Email ThisBlogThis!Share to TwitterShare to FacebookShare to Pinterest
Labels: GEOG 381

From the journalists at Here & Now (WBUR) comes a story of heroic librarianship and unfortunate timing. The current war on Ukraine is an effort not only of territory but also of erasure.
Ukrainian-American Wolodymyr Mirko Pylyshenko dedicated his life to building a collection of artifacts that would make denial of Ukrainian identity impossible. Scott Tong's  interview (11-minute listen) with his daughter and a Ukrainian municipal official describes the building of that collection and the unfortunate timing of its return to Ukraine.
This story is not unprecedented; what comes to mind most immediately is the tale of the Bad Ass Librarians of Timbuktu, who heroically protected artifacts in Mali.
Lagniappe: Poetry
Among the documents considered vital to this archive are poems. The most brutal dictators, it seems, fear poetry. I recall a Romanian friend who was imprisoned as a teenager for reading a poem. Her father was able to get her released after five days; her classmate who had written the poem served five years. For a poem about the beauty of the land.
In Nicaragua today, poets and their readers take similar risks.
Posted by James Hayes-Bohanan at 1:37 PM No comments:

Despite the popular brand name, tea does not grow in Arizona; nor does coffee. Except where it does: in the terrarium known as Biosphere 2, which was built just north of my old home in Tucson when we lived there in the 1990s.

Coffee is growing in both the "rain forest" and "orchard" portions of the experimental planet-in-miniature. 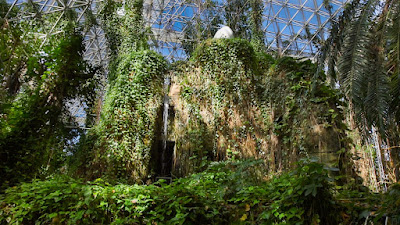 New plants are being added as part of a peculiar fundraiser related to Earth Day. Donors can pay $500 for the chance to help plant seedlings, and $100 for 12 ounces of a decaf version of the crop. Details are scant, and as a Coffee Maven I do have some questions. One of the collaborators in the project is a part-time faculty member in the department from which I eventually wrested my doctorate, so I might start my inquiries with him. Stay tuned.

Posted by James Hayes-Bohanan at 10:59 AM No comments: