To build up, construction workers first have to dig down. Doing foundation work 25 feet below grade, workers in Boston recently found a shipwreck! Even in Boston, such a find is rare -- probably the first of such a large vessel -- but it is not entirely unexpected.
As the photo shows, at least one beam had been pushed through the wreck before further work revealed the hull. To its credit, the developer alerted city officials and is allowing for at least some preliminary research. The ship appears to have been carrying a cargo of lime when it ran aground in Dorchester Flats about a century and a half ago.


As most Bostonians know, a significant portion of the city -- notably such neighborhoods as Back Bay -- were built by filling in shallow waters at the mouth of the Charles River over a period of many decades, so that nautical structures are sometimes encountered far from the shoreline.

Posted by James Hayes-Bohanan at 8:21 AM No comments:

I had the good fortunate of excellent teaching throughout my years as a student. (This was in the days before the Testing Industrial Complex tried to put all teaching into little boxes, but that is a digression I will take up elsewhere.)

Several of those teachers were in my history and social-studies classes in late elementary and middle school, and I remember clearly a realization that they helped me to reach somewhere around seventh grade. The history of the United States could be seen as a series of episodic expansions of the ideals of liberty and justice to encompass new populations. The ideals originally applied to a very few, and each generation addressed its own project of widening the circle.

It was years later that I learned something about the context in which all of this learning took place. I was in a school that had only very recently been integrated -- we learned that Brown v. Board of Education had been decided in 1954. We did not learn that it has only reached our part of Virginia in around 1970. We also did not learn that the legality of mixed-race marriage had only been settled in 1967, based on the case of Mr. and Mrs. Loving, who had arrested in their bedroom just 90 miles from our school, simply for being married.

Attitudes change, thankfully, and what seems a perfectly defensible societal norm in one generation is recognized as harmful bigotry in the next.

We live in volatile times, in a political season characterized more by division than by reason. But in general, the arc of history continues to bend toward justice, as the Reverends Parker and King have said. In fact, today's fractious politics can be seen as the last gasps of outdated thinking, as people struggle with their loss of unearned privilege.

In any case, this week I heard two compelling conversations with people who have been surprised to find that they have become leading advocates on one of the current growing edges of liberty -- the rights of transgender Americans. Neither of these straight, white men expected to speaking out as they have been, which makes these conversations with Marc Benioff and Rev. Mark Winfield all the more interesting. Each is worth listening to carefully.

Mr. Benioff is the CEO of Salesforce, who speaks with David Greene about his company's support for GLBT civil rights in North Carolina. Rev. Winfield is a Baptist pastor who decided he should do some research about transgender people, resulting in a Dallas Morning News blog post that has received far more attention than he ever expected. His recent conversation with Rachel Martin warrants thoughtful listening.


Posted by James Hayes-Bohanan at 11:39 AM No comments:

Take This Coffee for the Road

I have been hearing about Pavement Coffee in Boston from some of my students who reviewed Pavement for my coffee-shop assignment (yes, I'm that kind of professor). Meanwhile, my favorite librarian found a story that is literally about pavement coffee. (I'm also the kind of professor who grimaces when "literally" is misused; in this case, it literally is not.)
From the other side of the world comes news of materials scientists who have collected coffee grounds that would otherwise go to waste, and figured out a formula by which they could be repurposed to make underlayment for road surfaces -- the sub-pavement, as it were. The work was published in the forthcoming issue of Construction and Building Materials and is described by Phil Ritchie in Cosmos magazine.

We learned about it from Sarah McColl's article Where the Roads are Paved with Coffee, published in takeapart. Although the title suggests a bit more than the current reality, McColl's version of the story is a good read as she addresses other interesting aspects of coffee and coffee waste.
Posted by James Hayes-Bohanan at 6:10 PM No comments:

Be a Good Ancestor, Please 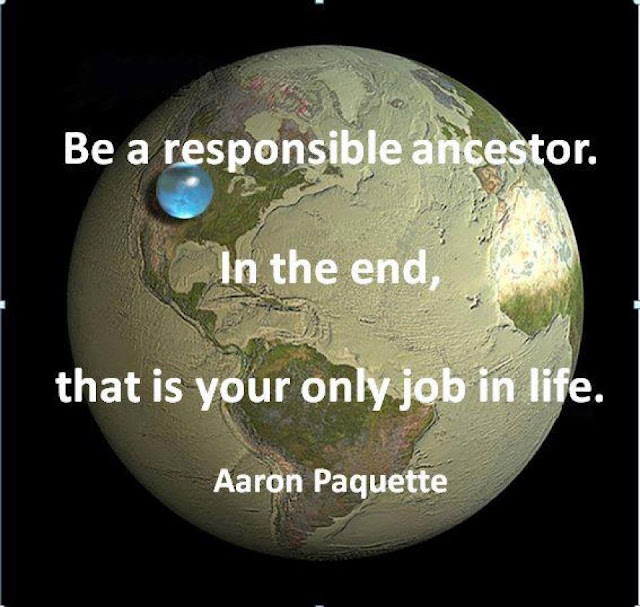 I like the message AND the image. The former is, I would like to think, obvious. In 2016, though, it seems a lot of us are not thinking about our real job.
The image shows what the world's water would look like if gathered into a sphere resting in western North America. Not only is this sphere relatively small, we should know three things about its composition:


And one last thing -- as the 2 percent that is frozen melts, it becomes salt water, not fresh. In fact, some of it chills the salt water slightly, leading some people to think that the world is not warming.

We usually start our EarthView presentations with a discussion of the 97-2-1 breakdown, and often then use the globe to talk about where that 1 percent of water is distributed.
Posted by James Hayes-Bohanan at 3:55 PM No comments: 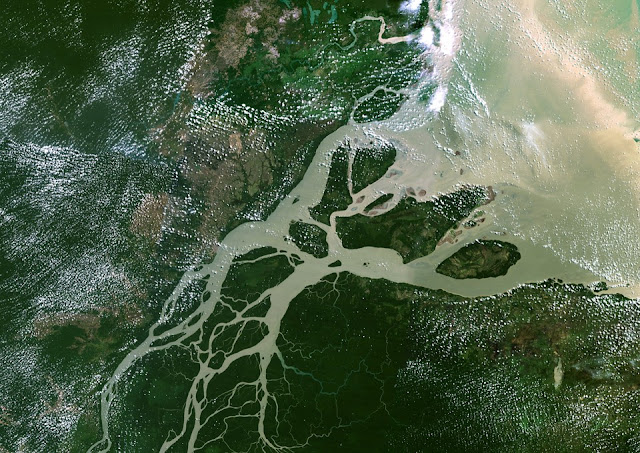 "The Amazon" is a term that can refer to the same geographic area in slightly different ways. Politically, it is a collection of states in northern Brazil. It is also the name of a river that begins either in Peru or in Manaus, depending upon whether one considers the Solimões to be a separate river. It can also refer to the 1,000 named (and countless unnamed) rivers that drain toward the sea through that river (including a dozen rivers over 1,000 miles long in their own right). It can also refer to the 3,000,000 square miles of land drained by these rivers.

It is important to note that the "legal Amazon" covered by those northern states of Brazil cover only about half of the basin of the same name. The rest is divided among Bolivia, Colombia, Ecuador, Guyana, Peru, Suriname and Venezuela. We associate the Amazon with Brazil because Peru includes only 16 percent of the basin, and the other countries much less.

It also, of course, refers to the rain forest that covers roughly the same ground -- the largest and most diverse ecosystem on the planet, responsible for a large proportion of the oxygen we breathe. I have been fortunate enough to be in the Amazon four times. The Brazilian state of Rondônia is where I did my doctoral research in 1997. During that visit, I briefly saw the Wedding of the Waters in Manaus, where the Rio Negro and Rio Solimões flow together for many miles before mixing. I returned twice for further research -- with my family in 2000 and with a biology student in 2003. During those visits I got to see the legendary pink dolphins and manatees -- freshwater variants of those marine mammals more than 2,000 miles from salt water.

My most recent visit to the Amazon Basin, I saw glaciers, llamas, and fields of quinoa. The rushing streams we found in highland Peru during our 2014 visit to Machu Picchu were flowing away from the nearby Pacific Ocean, and would ultimate reach the Atlantic at the mouth of the Amazon.

At the end of my 1997 visit, I also had the chance to see that famous mouth from the air. One-fifth of the world's river water reaches the sea there, in a flow that is difficult to describe. Two hundred miles out to sea, the fresh water of this flow dominates. The world's largest fluvial island sits near the mouth -- Marajó is the size of Switzerland. The river that can hold such an island does not even really look like a river. When our airplane approached the city of Belem just after dawn, I thought the pilot had taken us out over the ocean.

I do not want to suggest that the Amazon is more exotic than it is. While I was there I visited universities, used computers, rode in cars. I even went to a shopping mall a couple of times. Several million people live in the basin, and many of them live in cities. In fact, urbanization was the subject of my research in the Amazon.

But the scale of the river really is stupendous, and many parts of the basin are little-known. This is all brought to mind by a very surprising discovery recently announced by oceanographers who were working just off-shore. A coral reef six hundred miles in length has just been found under those muddy waters. The mud of half a continent has been obscuring an area of coral and sponges about the size of Connecticut. Observations of unexpected fish populations published in 1977 had suggested the possibility, but it could not be confirmed until last month. Little is yet known about this reef, except that it is -- like those dolphins and manatees in Rondônia -- uniquely adapted to very atypical conditions.
Posted by James Hayes-Bohanan at 11:49 PM No comments: