In the middle of the Detroit River -- between the Detroit waterfront and the Riverside Drive in Windsor, Ontario -- Belle Isle is a small island beloved by the people of Detroit.

It was therefore the perfect place to memorialize Detroiters who have been lost to the Coronavirus pandemic. It seems especially fitting that the memorial would take the same form as many other ceremonies this year -- a car parade. 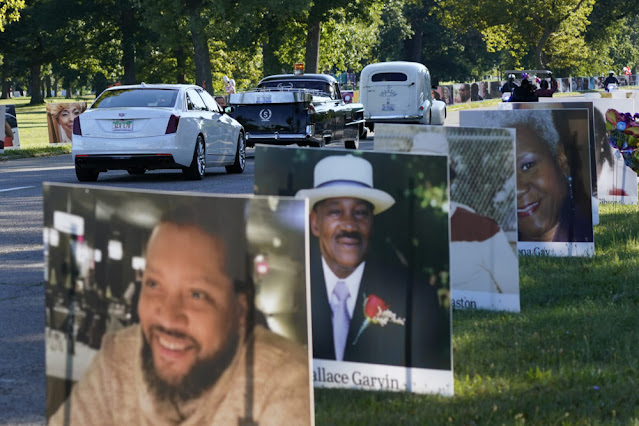 Near the end of the story, people wax nostalgic about the radio program of Martha Jean McQueen. Her prayerful pronouncements voiced over the music of Rev. James Cleveland are typical of the excerpts I could find online.

Posted by James Hayes-Bohanan at 2:48 PM No comments:

The EarthView team is proud to be part of the NERC 2020 online conference for social studies educators throughout the northeastern United States and beyond. The 50th anniversary of this illustrious gathering is taking place fully online. EarthView has been featured at several real-world NERC meetings, and we are very happy to continue the tradition.

As the awkward staging of the welcome message above suggests, Covid-19 safety was a key consideration as we made EVOnline field trip that will be part of our session on Monday, November 2. Please join us -- registration is free but is required by October 26 (one week in advance).

The webinar session begins with a "field trip" comprising about a dozen brief presentations using the EarthView globe and some of our EarthMap giant floor maps. This will be followed by a discussion of the use of such maps in learning geography and social studies, with Q&A moderated by Andrea Weng, the president of our BSU Geography Club. We will conclude with our team's recommendation of resources for online learning at all levels.

A link to the entire presentation will be made available on this blog post after the event; it will include links to individual segments of the field trip, for use in classrooms and by those teaching and learning at home.

See the NERC 2020 page for registration and the World Beyond Borders page for details our session. Please register (for free) by October 26 to receive the Zoom link for our session and to arrange for PDP credits if needed.

Posted by James Hayes-Bohanan at 4:13 PM No comments:

My favorite librarian habitually checks the National Day calendar, looking for things that might be fun to celebrate, and this often inspires special meals in our household. It also leads to odd discoveries, such as the Mad Hatter Day.
The "holiday" began in Colorado in 1986, simply as an excuse for "crazy" or whimsical behaviors, especially involving the wearing of hats. When I posted this photo online, a friend in Brazil immediately commented with the Portuguese version of the term, and some virtual chuckles followed.
As detailed in a Mad Hatter Day article in the Panache section of Economic Times, the manic character is associated with Lewis Carroll's Alice in Wonderland, though he never used that exact name for his character the Hatter. The article explains why today's date is used to celebrate the character.
It errs, however, in associating the "madness" of haberdashers with their use of lead; mercury was the real culprit, as mentioned in the video above. It is an easy mistake to have made: both are metals known to be neurotoxins, and in reality the toxicity of mercury is gravely serious. In fact, I am justifying the time I am spending on this blog post by the fact that I am sharing it with my Environmental Regulations class later this morning. We will make some comparisons between mercury and dichlordiphenyltrichloroethane, which we have been studying for the past few weeks.
Mercury and DDT are different in many ways, but both are subject to biomagnification in fatty tissue and were in use for decades before their toxicity was understood. Both exemplify the limitations of free markets when managing environmental risks.
Posted by James Hayes-Bohanan at 9:08 AM No comments: