I grew up outside a small town in northern Virginia in the first decade after the what is commonly called the Civil Rights Era. My early lessons in U.S. history were through a very particular set of lenses that foregrounded Virginia's place in the Revolutionary and Civil Wars; we learned both names for all the battles in the latter war, and spent a full day exploring the nearby fields of Manassas / Bull Run after extensive study of its details. We knew that slavery was at the center of the war and that it was a terrible thing, though we also learned that many heroic figures of the revolutionary period had held slaves.

A few years later, we learned about Jim Crow, Kansas versus Board of Education, and Martin Luther King -- all of which seemed to belong to a much earlier period. I was an adult before I realized how close in time those events had been, and middle-aged before I realized that some victories had come very late to our particular part of Virgina. 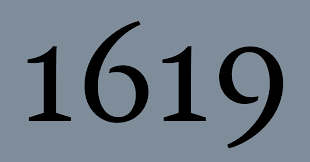 I was reminded of all of this today by the way one of my favorite journalists opened a program devoted to the 400th anniversary of a particular part of Virginia history I do not recall learning. It was 400 years ago this month -- in August 1619 -- that people were first brought as slaves to what would become the United States. This grim anniversary is being recognized by the New York Times in a project known simply as the 1619 Project. (I had seen some links to this project, but had not yet clicked through -- living in Massachusetts, I was curious but for the wrong reasons: I thought it was a project about pre-Plymouth communities surrounding my current home.)

Tanzina Vega explored the topic in three brief but powerful conversations on her radio program The Takeaway. The first segment is a discussion with Dr. Ibram X Kendi and Professor Stephanie E. Jones-Rogers of the importance of slavery as a foundational aspect of the United States, and the tendency to underplay its importance.
To open the discussion, Vega asked her listeners to describe what they learned about slavery in school. This turned out to be a great way to enter the discussion, because the approaches varied so much. Americans have a lot of opinions about slavery, but little common understanding of it, and a general tendency to underestimate its importance.


In the third segment, Vega discusses asks scholar and poet Clint Smith how the 1619 project can inform responses to the notion that slavery in the United States took place so long ago that it is now time to "get over it." They wrestle with whether such a sentiment is even worthy of a response, concluding that although some remain impervious to history's lessons, education remains a worthwhile undertaking. Listen through the final minute, when Smith reads powerful poetry he contributed to the NY Times project.

An example of the gaps in my own education about slavery is that I did not know the term "middle passage" until I visited a museum in Regla, Cuba in 2003. I was aware of the phenomenon signified by the name, though I did not comprehend the scale of the transAtlantic trade in humans.  Several visualizations now help to convey the enormity, but I think even these resources simply show how incomprensible it is.

I highly recommend the conversation WAMU journalist Joshua Johnson had with Nikole Hannah-Jones, who launched the 1619 Project for the New York Times Magazine. From this conversation between them and with listeners and other key contributors, we learn the reasons for the project, the profound impact it has already had on many readers, and the predictable backlash from people whose worldview has been challenged, perhaps for the first time.

I had gradually become aware, for example, that the project avoided the conventional use of the word "slave" as a noun. This conversation explains why this was a conscious -- and important -- choice. I am reminded of some of my own, much more modest writing about immigration policies that function as human sieves. In other words, the institutions of slavery, immigration policy, and gerrymandering contrive to extract the wealth of human labor without recognizing the full personhood of the associated humans.

Backlash: The Vague and the Furious

In Who Got the Maddest About the New York Times’ Slavery Coverage?, Slate journalist Ashley Feinberg describes the response of various pundits -- including at least one with actual history credentials -- who could have used a trigger warning; without one, they lashed out at the messengers of uncomfortable truths about the central role of slavery in the history of the republic. Their sputtering ire is testament to the importance and veracity of the 1619 project.

That historian, of course, is the inevitable Newt Gingrich, a fellow member of the professoriate described by Feinberg as "a former speaker of the House and noted wife enthusiast."

Posted by James Hayes-Bohanan at 10:28 AM No comments: