No Place (Setting) for Distraction 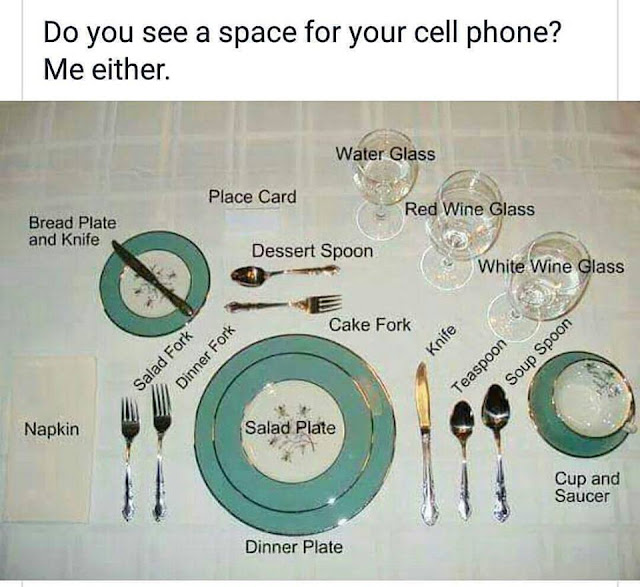 The dining version of a classroom. Meals and classes should be considered a brief vacation from constant distraction. The lulls in conversation are when the best ideas are allowed to flourish.

A recent article in Forbes includes social-media addition as Habit #9 of 14 habits that can get a person fired. This is a bit tricky, since mastery of social media is often important in finding a job and in advancing the goals of an organization. But it can very easily get out of hand, and interfere with the all-important matter of being present. 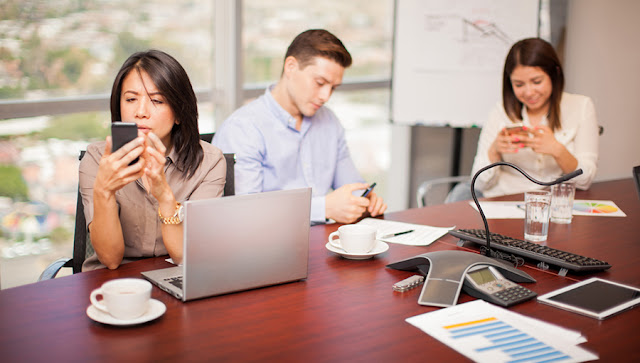 November 2017 update: Writing for the New York Times, Professor Susan Dynarski makes a strong case for excluding laptops from classes and meetings, even if they are being used primarily for note-taking.

Posted by James Hayes-Bohanan at 8:18 AM No comments:

Something About the Coffee ...

At one point in our lives we were reading a lot of Dave Barry, the Miami-based humorist. (Humorist means a comedian who is only somewhat funny, or funny to older people.) Our favorite essay is "Some of the Pluses of Having a Pet..." in which he describes the exploits of his "auxiliary dog" Zippy. Read the essay now if you want to avoid the spoiler below.

While you are gone I'll mention that this post is really about Facebook, not Dave Barry. Specifically, it is about the placement of ads, which show that so far we have little to worry about from whatever algorithms bring us those ads. "We think you'd like a blue bathrobe!" is not very brilliant insight if I have just bought one. Which I have.

You're back? If so, you know that Zippy destroyed a rug despite being admonished not to. Repeatedly. In the tiny dog's tiny brain, all it could remember was "something about the rug." Leading him to rush to the rug with no clear idea what they had been saying about it.

And thus it is with Facebook, coffee and me. The tiny brain of its ad algorithm sees a lot about coffee on my feed, and therefore decides I will want opportunities such as this one: 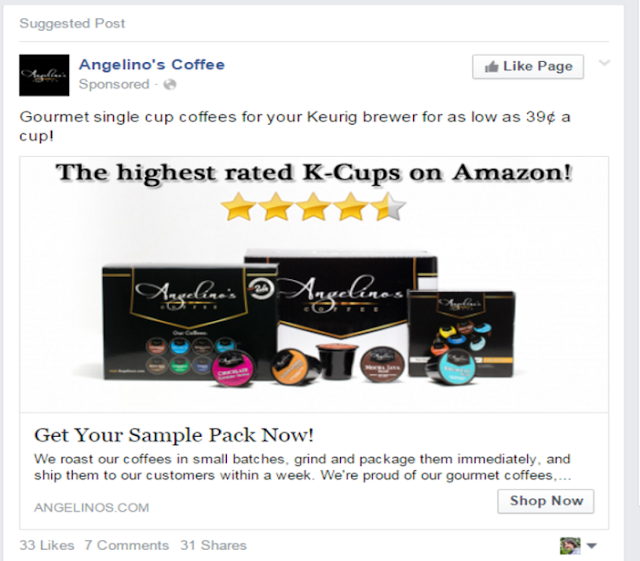 Aside from the ecological concerns, clearly the algorithm has not caught on to my concern for coffee care and the impossibility of getting good quality from this technology. As the ad indicates, the coffee will have been ground a week before it reaches a customer.

I have seen the nitrogen-flush packaging machines that fill the K-Cups, and they are indeed impressive. We used a similar process when I was in the rations business, and we could keep foods shelf-stable for up to three years. But coffee acts as a sponge, and fine grinding makes it stale quite quickly. This does not matter much for mediocre coffee like Dunkin' Donuts, but for "gourmet" coffee it does make a difference.

And any coffee that costs $23 a pound should be a specialty coffee, though I have my doubts about these. The offer above is equivalent to paying $23 for a $10 bottle of champagne, but having it opened and recapped a week ahead of time. Not quite a bargain.

I know these will sell, though, perhaps to people in offices on my own campus, where the coffee "bargains" are even less favorable. Keurigs and vending machines have been placed throughout so-called "green" buildings, even as students have worked with me to propose a much better alternative.
Posted by James Hayes-Bohanan at 8:09 AM No comments:

It seems that each year I begin to anticipate El Día de Muertos a bit earlier, and to learn new things about the cultural implications of the Day of the Dead. In fact, it is now my theme for an entire week -- my very own Semana de los Muertos.

Before adding a few new items, I am listing some of the posts from recent years:
All of this is by way of background for a couple of short pieces that came to my attention recently, and that are not nearly as provocative. Those not very familiar with the tradition, in fact, might to best to start with these short videos.

From the Film School Shorts series of the Ringling College of Arts and Design comes a delightful introduction to the tradition. At first this brief piece resembles the 2014 feature film Book of Life, which I discussed at length in Dia de los Libros. That film was intended to capture the essence of the holiday, but quickly got caught up in the pressures to conform to Hollywood norms that even "indie" films face. The short production from Ringling students is much more successful in its representation of a young girl encountering her dead relatives with a fearlessness and joy that would be out of place in many cultures.

Finally, the indispensable Tish Hinojosa describes the Day of the Dead in Hasta Los Muertos Salen a Bailar (When the Dead Come Out to Dance), from her children's album Cada Niño (Every Child). As with most of her music, this song is English/Spanish bilingual in the sense that entire verses are sung in one language and then the other, so everyone gets the message. This particular video version really captures the whimsy of the holiday by putting an obscure Disney short to Hinojosa's tune.

Of course, Casa Hayes-Boh and Whaling House are festooned for the week, and after years of acquaintance with the Mexican traditions, we do honor the dead in our own lives a bit differently that we otherwise would.

Posted by James Hayes-Bohanan at 7:43 PM No comments:

A single hour that changed my life came in 2012, when I had the honor of being present in a hotel conference room with Dr. Mary Robinson, former president of Ireland and former UN Commissioner for Human Rights. It was for her pioneering work in these roles -- and for her even greater contributions after leaving government service -- that my professional organization was presenting her with our highest award. As with many such awards, she was really doing us a greater favor by accepting the Atlas Award than we were doing her by presenting it. Nonetheless, it was an important moment for our entire discipline, and I hope others in the audience were as affected as I was.

It was from her acceptance speech that I learned of the concept of Climate Justice, as she challenged the geography profession to rise to the challenges presented by global injustices related to climate change. Specifically, she pointed out that we have the tools to understand and explain the geographies of responsbility, vulnerability, and power that lead to profoundly unfair relationships  between the causes and effects of climate change.

I was so moved by her presentation that I now offer an entire course on the topic, and more importantly her admonition to my colleagues and me infuses much of what I do in all of my academic work.
Just after a very productive session of my Climate Justice course this afternoon, two of the stories I heard on PRI's The World struck me as particularly relevant. From opposite sides of the world, listeners learned of two very different stories of injustice with complicated relationships to climate change.

The first was the story of indigenous Mexican farm workers who have been displaced from work because of drought in California, and their inability to collect any kind of unemployment insurance because of their status as essential but undocumented workers. What makes this especially complicated is that many were in California precisely because they had been displaced by drought -- and the pernicious effects of NAFTA (not mentioned in the story) -- in their home regions of Oaxaca, Puebla, and Guerrero.

Then, from the other side of the world and the other side of the climate coin came the story of toxic wildfires in Indonesia causing severe respiratory illnesses throughout Southeast Asia. In addition to the severe health consequences and fatalities in the short run, in just a few days the fires have rivaled major economic powers in their unwelcome contribution of greenhouse gases.
Posted by James Hayes-Bohanan at 7:13 PM No comments:

I always begin my course on the Geography of Latin America with Carlos Santana's Africa Bamba, which I also use to open my 2012 post No se olviden Mexico. Santana ends the song with this admonition meaning "don't forget Mexico," but I like to play it because it highlights the multiplicity of Latin American identities, including relatively recent connections with Asia and the very deep influence of Africa in music, food, religion, and more. Those connections are also evident in Mama Africa, a song by the inimitable Chico Cesar that was the soundtrack of my 1996 visit to Rondonia. His family introduces him in a video version that I featured in a 2011 post on our EarthView blog.


All of this is to set the context for my introduction of the idea of syncretic religious traditions in the Americas -- whereby Catholicism was blended in various ways with the traditions of the indigenous people who were being conquered or with those of people brought in bondage. In either case, the brutality of conquest and slavery has left a legacy of religious expression that is -- to say the least -- complicated.

For me, a favorite example is the story of Iemanja, which I always present as a spoken-word story, after listening to Angelique Kidjo's ode to this goddess of the sea.

For those who do not know the story of Iemanja -- also known as Yemaya -- this music offers a nice introduction, and this particular video also demonstrates the variety of ways that this deity is represented, from West Africa to Brazil and Cuba. 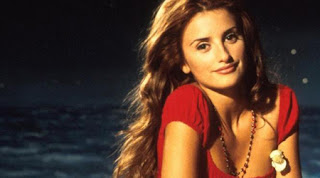 Iemanja has an important off-screen role in the otherwise silly 2000 romantic comedy Woman on Top, in which Penelope Cruz plays a cook in a seaside restaurant. When she leaves the restaurant for reasons essential to a romantic-comedy plot, the restaurant suffers from her absence. More specifically, it suffers from the absence of the rituals by which she had been showing her devotion to Iemanja.

Known as Iemanja in Brazil, this Orisha is known as Yemaya in Cuba, where she is strongly associated with the port town of Regla, near Havana. I was fortunate that during my one visit (so far) to Regla in 2003, a shrine was being created in her honor as part of an Afro-Cuban museum exhibit that was focused on the Orishas and on the terrible middle passage.
Posted by James Hayes-Bohanan at 5:36 PM No comments: 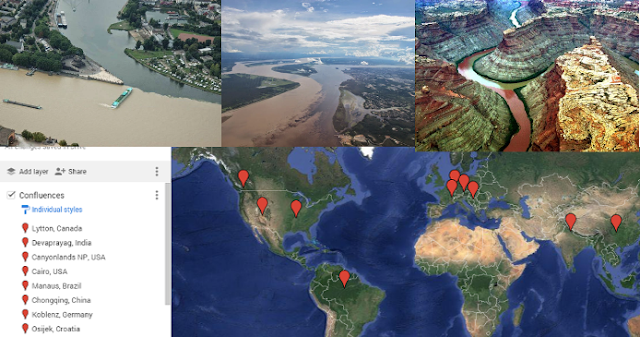 I have gone more than a month without posting to this blog. To keep the blog alive, I'm going to cheat a little and point to a post I recently added on our EarthView blog. Written for middle-school geographers, this should be of interest to readers and explorers of all ages.

See Wedding of the Waters or Amazon Surprise to learn about the world's most famous and unusual river confluence -- which I was lucky enough to visit in 1996 -- and to learn about several around the world that are lesser-known but equally intriguing.

Lagniappe
And because yesterday I realized that nobody in my class had heard of Mr. David Byrne, I include this thematic song as a public service. (See all of the David Byrne geography references on this blog.)

Posted by James Hayes-Bohanan at 7:16 AM No comments: