HOW TO HELP -- Ellicott City Parternship

Ellicott City encompasses 30 square miles of the northeastern corner of Howard County, Maryland, but to people from the western suburbs of Baltimore, the name refers to the charming shops along a single street in a small granite ravine.


I enjoyed frequent visits to Ellicott City during my days as a student at UMBC, and once even walked the seven miles from my apartment just to enjoy a stroll along Main Street. The first breakfast of our honeymoon was enjoyed there, and we visit any time we find ourselves visiting family, including my in-laws who live in a modern condo perched high above College Avenue. I most recently blogged about Main Street in 2012, shortly after taking a haunted tour of  our old haunts.

We enjoyed shopping in Ellicott City just over a week ago, and were thus all the more shocked to learn of the devastation that took place there last night. Notice on the map above that several streams converge near the upper end of Main Street and then disappear into buried channels. 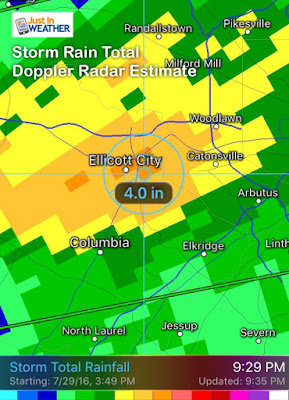 Estimates from Doppler Radar show the greatest intensity of rainfall centered over this narrow valley, and local rain gauges indicated even greater intensity. The results were devastating -- a beautiful streetscape gutted in a very short period.
Rushing waters quickly undermined buildings, some of which may not be salvageable. More than 100 people were rescued from automobiles and from the Phoenix Emporium at the bottom of the hill by heroic firefighters, police, and civilians.

During our most recent visit to Ellicott City, we noticed a great density of Pokemon hunters, which means that plenty of smartphones were on hand last night to document the damage as well as the rescues. For some of those images and videos, see Flood Destruction (Just In Weather) and State of Emergency (Howard County Patch). The arts community is vital in Ellicott City, and has already begun raising funds for recovery.

The fact that this flooding occurred where natural streams had been put into underground pipes reminds me of the successful daylighting project in  Yonkers that I described earlier this year.  Given the extreme intensity of last night's storm and the very narrow topography of the Main Street area, however, it is doubtful that a comparable project would have been enough to make a difference in last night's events.

Dan Somers recorded two minutes of cars being swept down Main Street during the flood.

YouTube user fatosh69 filmed 5 minutes from the window of a second-story restaurant. Warning: this is the most unsettling video of these events in real time. One local friend -- who recently survived a tornado -- describes this as horror-movie footage.

David Franklin Perry recorded a 20-minute walk-through with police during the night. He begins in the middle of the affected area, moves uphill and then back down to the base of Main Street.