Thanks to social media, I continue to watch news from Ellicott City, Maryland. It is a charming little town that I visit every time I return to Maryland; a couple days ago, I posted about the most recent flood to ravage the town, just a week after we had enjoyed walking and shopping there. The town has experienced severe floods every decade or two since it was founded. This is the first flood, however, to have taken place in the age of smart phones, and it happened during the Pokemon Go craze, so that even more recordings of the calamity are available than would be otherwise. It also seems likely that even though this was far from the highest flood level experienced in Ellicott City, waters seem to have risen much more rapidly than in prior events.

The small city continues to return, owing to several factors, and in fact some preliminary rebuilding is already underway. The article and video Shop owners search for closure offers some insight into the reasons people will rebuild.

A subsequent article describes the efforts of a local kayaker who has found cars in the river nearby, along with the town's iconic clock tower. He mentions the fact that the nearby Patapsco River floods when flow reaches about 10 times its normal volume. On most rivers, this level -- called bank-full discharge -- could be expected to occur at every 2-3 years.

During this week's flood event, flow rates reached 300 times normal, and perhaps 500 times the recent low. Notice the scale on this graph -- it is logarithmic, as are many graphs used by hydrologists. If this graph used a linear scale, the peak flow would be shown somewhere a couple dozen feet above your screen. 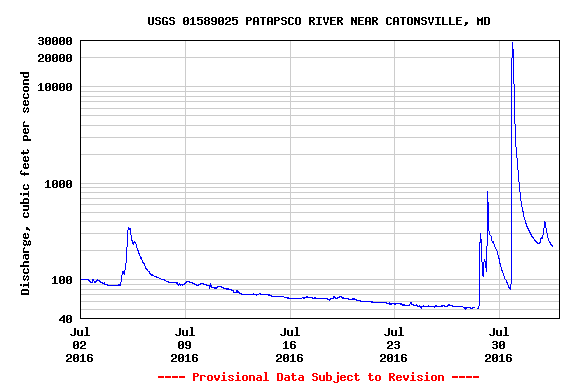 The relationship between flow and elevation is unique for each point along any given channel -- it is known as the rating curve. Stream gages actually measure the water's elevation, and then the volume is calculated from that. The night of July 31, the gage surged more than 15 feet above its prior level, and quickly fell back to just a foot or two above that level. 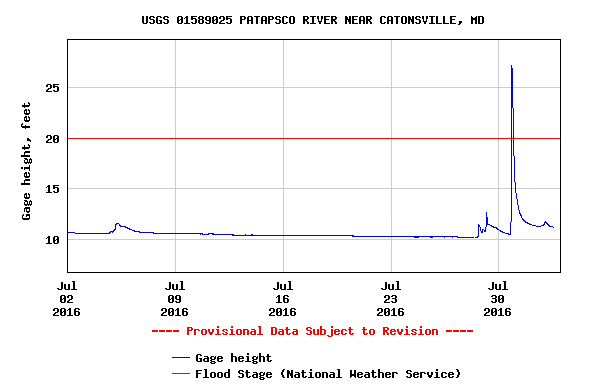 Note that this is these levels were recorded in the main channel of the Patapsco. It represents an averaging of flow over a much larger basin that the small tributary basin where the most intense rainfall occurred. In other words, the flashiness of this event -- had it been measured at the base of Main Street -- would have been even more dramatic than what is shown here.

Maryland photographer David Alton has posted some beautiful, poignant and intriguing photographs of the aftermath, including several that reveal the extent of structural damage. Flowing water is powerful, and its ability to do destructive work increases exponentially with depth. What makes it all the more powerful is that its ability to entrain sand, gravel, cobbles, and even boulders (those are actually technical terms) also increases exponentially. So the rushing water shown in so many social-media videos during the storm was actually like flowing sandpaper, doing this kind of scouring below the surface -- indeed below what used to be the streets and sidewalks. As a fellow geographer in the area pointed out, loose cobblestones were readily available on this street, perhaps adding incrementally to the undermining that occurred.
During the storm, I became aware of the importance of this clock as a symbol of the town. A young man making a short video during the flood commented about the clock as he showed it being pulled away by the rushing water. "There goes the clock," he said almost reverently -- this signified much more than the other objects he could be filming at that moment. It is remarkable that just two days after it was found by the kayaker mentioned above, it was back on its pedestal, helping to restore a sense of place in Ellicott City.


Posted by James Hayes-Bohanan at 4:59 PM