Who knew that on the edge of the Bronx is a small island full of multi-generational family homes and small marinas, connected to the rest of the city only by a single, low bridge?

I certainly did not, until we watched a quirky 2006 film bearing its name: City Island. It stars Andy Garcia as a correctional officer who commutes from a house his grandfather built to a prison in Westchester County. He brings home an inmate who initially introduces more secrecy and dysfunction into an already complicated family dynamic.

Each member of the family is easy to dislike, and throughout the film they hardly seem to like each other. But the banter is as clever as it is cruel, and the various threads of discord are eventually tempered as they are brought into the open. 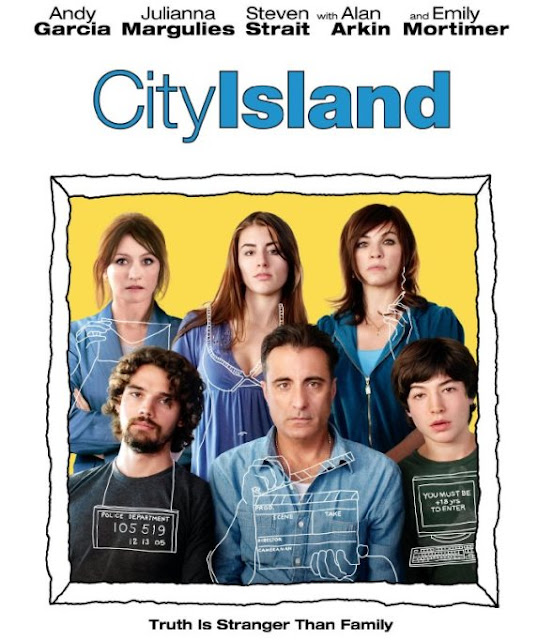 I wish we had known about the film last year, when we were frequently in the area because our daughter was attending Sarah Lawrence in Bronxville. We enjoyed getting to know Yonkers and Bronxville, and would have enjoyed exploring this little corner of the Bronx itself. We will definitely find our way there some time in the near future.

I also wish that the film had spent just a bit more time in the neighborhood. The audience is told about the importance of this place to the characters -- especially to the "Clam Digger" local played by Andy Garcia. He does describe it as a little-known square mile of the city (it is closer to 1/3 of a square mile) and the film does include some nice "windshield surveys" as characters drive around avoiding each other.

But aside from the unusual friendship that develops between the family's teenage boy and some female neighbors, we see little of the other people in the community. This was especially surprising during the climactic family showdown that takes place outside of the home, without a single neighbor becoming involved.

The film's official trailer gives away a few too many punchlines, so instead of watching below, I recommend finding the whole film on Netflix (sorry, DVD only at this point).