This blog title can be taken literally. Unlike the many maps we have seen that show what Florida, Boston, or some other coastal location would look like with higher sea levels, the figure above compares the iconic outline of Louisiana with the present-day outline of its dry land. An important caveat is that some of the removed areas are wetlands, meaning they are not under water all the time, but those lands are not available for most human uses (aside from fishing), so this outline warrants attention.

As Randy Newman and Aaron Neville remind us, extreme flooding is not new to Louisiana, nor is neglect. But the intensity of rainfall in the past week is unprecedented, with two feet of water falling in a single evening over a large area, and rivers cresting several feet above previous records.

Most affected, of course, has been Baton Rouge, a city already reeling from shootings by police and shootings of police earlier in the summer. As Emma Brown writes for the Washington Post, the flooding -- though devastating -- is reminding Louisianans that above all, they can and do rely on one another. The sacrifice of public-safety and medical teams as well as ordinary residents on behalf of each other has been nothing short of heroic.
It is not clear when, but at some time after these waters recede, a serious discussion must be had about the new maps of Louisiana. This week's flood -- called a 1,000-year event -- will certainly be reprised before another thousand years passes.

Lagniappe (a Louisiana term for a little something extra)

Randy Newman's version of Louisiana 1927 is included in my 2011 post about Old River Control. My Climate Attack post in February of this year was mainly about the Pacific islands of Kiribati, but it included a reference to permanent evacuations from the Gulf Coast. Finally, my Houston-New Orleans post of just two weeks ago highlights resistance to long-term thinking about rising waters and sinking lands.

And what's the opposite of Lagniappe (i.e., a little less)? 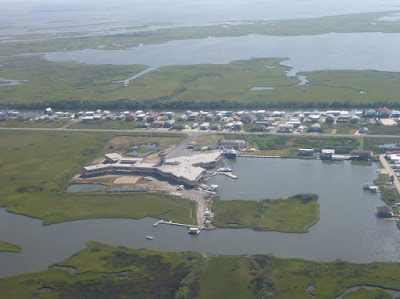 The laboratory of the Louisiana Universities Marine Consortium is located in the midst of that disappearing land. It is a place where those researching rising seas experienced severe flooding at work 75 times last year. It is one of dozens of such research facilities that are endangered by the very phenomena they were established to study, according to reporting by NPR coastal journalist Tegan Wendland.

Posted by James Hayes-Bohanan at 1:15 PM