Houston, Too Close to New Orleans

Although I love driving with music, whenever I am driving alone I am more likely to be listening to public radio. During a recent drive, I heard most of an excellent hour of journalism about urban planning, and it put me in mind of this great piece of driving music.

The reporting was an in-depth examination of urban planning and disaster preparedness in the great Texas city of Houston, which Jerry Garcia found to be "too close to New Orleans."

I am not quite sure what he ever meant by the line ... maybe he just meant the 350 mile stretch of Interstate 10 that joins the two cities. I was thinking, though, more abstractly ... about hurricane stories with eerie parallels.

To understand, we have to go back a few years, to Hurricane Pamela. Remember that one? Most people do not, because it was not a real hurricane. Rather, it was a hurricane simulation, described in some detail in the October 2004 edition of National Geographic. 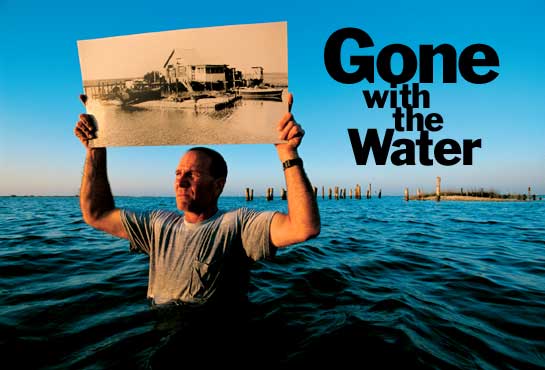 The feature article begins with a narrative describing the hurricane's aftermath as if it had actually occurred. I remember reading it with students in my climate change class a year later -- and it took a while for them to realize I was not reading an account of Hurricane Katrina, a very real storm that had struck New Orleans in August 2005.

In other words, a lot of what happened to New Orleans not only could have been predicted; much of it was predicted. Which brings us to Houston, a decade later. Houston should be especially sensitive to hurricanes. Not only has this coastal city had plenty of its own experiences over the past century or more, but it received many refugees from New Orleans during Katrina.

So Houstonians should be eager to prepare for future hurricanes, and some of its leaders are indeed working on serious preparations for what is called a Mighty Ike hurricane. In this case, the real hurricane came first. Hurricane Ike struck Haiti, Cuba, Louisiana, and Texas, costing many billions of dollars and killing close to 200 people (some were never found), but a shift in its path spared Houston the worst of the damage, and gave planners there a bit of a second chance.

The planning and recommendations for what was dubbed Mighty Ike have provided an extensive case study of disaster preparation more generally. Interactions among population growth, construction patterns, transportation networks, and climate change are complex and have played out in this planning process. It is the subject of a one-hour report by Reveal News that serves as a primer on the environmental geography of hurricane preparation.

One segment of the reporting focuses on the dangers posed by tank farms -- the large storage tanks associated with the petroleum and chemical industries that are so important in Houston. A small sample is shown here, in the Bayshore area.

Each circle is a tank, perhaps 150 feet in diameter and 30 to 50 feet high. Each is surrounded by a square berm that provides secondary containment in case of a rupture in the tank or a leak in its piping. In my former life as a regulator analyst, I would sometimes have to calculate the required height of such berms -- it was usually just a few feet. (Yes, I put my high-school math to work in the real world.) 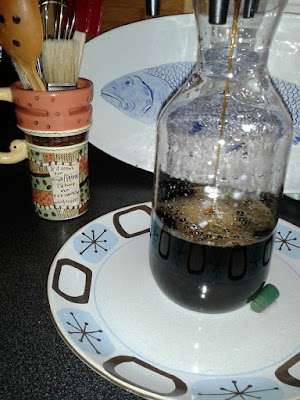 Right after hearing the Houston story, I found a kitchen-scale analogy while draining cold-brew coffee with a Filtron brewer. I placed a high-rimmed plate under the decanter, just in case I had too much water (which I did not). As with the berms around the giant tanks, a relatively modest rim provides all the needed containment -- which is based on the amount of storage in the tank or in the coffee maker. These regulations were never intended to protect the tanks from water coming in, just as my plate is not designed to protect from a wave crashing across the kitchen counter. The problem, of course, is that these tanks are far more likely to encounter a tidal surge than my coffee is to catch a rogue wave. The containment berms need to be re-conceived as exclusion berms or -- as the story indicates -- these huge tubs of poison can simply float away.

The report also serves as a reminder of all the ways in which humans will resist uncomfortable news about the environment, and will certainly resist spending money to prevent or mitigate disaster. Geographers and other experts now tend to avoid the phrase "natural disaster," in fact, because choices made by humans so often shape the outcome of catastrophic events (not necessarily for the same humans).

It was not just Houston and New Orleans that were brought to mind by this reporting. The Might Ike story was updated for radio a year after its original broadcast, but I heard it just a day or so after a localized but devastating storm struck one of my favorite places -- Ellicott City Maryland. I have posted about this twice so far -- Flood Flash and Flood Peak -- and may be adding a third post, as I think about the Might Ike scenario and as I read local critics who recognize the connections between Main Street flooding and the construction of houses and shopping areas in the headwaters.

Sadly, Houston did get.a chance to experience the kind of problems in the Might Ike exercise, and it was not good. Hurricane Harvey in 2017 and Tropical Depression Imelda in 2019 did tremendous harm to the city. As Kate Yoder wrote for Grist, the latter storm -- which dropped 40 inches of rain in one event -- might lead to the disappearance of the dismissive phrase "not even hurricane" from local language.

Posted by James Hayes-Bohanan at 12:20 AM