Muir to the Story

I like to think of myself as too bright and wise to engage in hero worship, but I must admit that certain people occupy high pedestals in my view. John Muir is one of them. I am not alone in this his name graces many schools, natural features, buildings, and even a minor planet, according to a recent article by Justin Nobel, The Miseducation of John Muir.

Muir is best known as the founder of the Sierra Club (of which I was an active member when we lived in Texas) and for his role in establishing the National Park Service. I learned of him in the first geography course I took as an undergraduate -- Conservation Thought -- in which his views we contrasted with those of Gifford Pinchot, the first director of the National Forest Service. In modern parlance, the two would be considered "frenemies" -- one dedicated to the preservation (non-use) and the other to conservation (sustainable use) of wild areas. Despite understanding the importance of balance between the two, I must admit always liking the purist Muir a bit better than the pragmatic Pinchot.

For those who admire Muir as I have -- or who love the National Parks that are his legacy -- I recommend Nobel's article, which exposes some "ugly truths" about Muir, along with some more benign but little-known aspects of his early biography.

First, the benign. I did not know that he had been  both a worker and a mid-level manager in the Industrial Revolution; the wilderness he loved was a strong contrast with the machinery that was equally dear to him. He also had walked the post-war American South long before he walked the Cascades of California, covering 1,000 miles on foot. 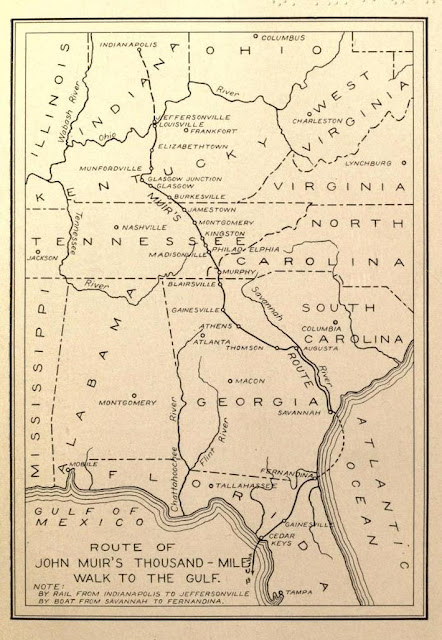 And now the ugly: His writings about that walk extol the natural beauty while describing the people -- especially indigenous people -- in very ugly terms. He did not recognize -- at least as a 29-year-old explorer -- that the views of nature he advocated were already held by people he viewed as primitive.

Looking back, Native Americans today are critical not only of those ugly attitudes but also of the adulation Muir received for doing things -- like the long walk itself -- that were already part of their cultures. In this way, Muir is a focal point for the deeply problematic way in which even European-American approaches to land stewardship have usually marginalized those who were its stewards long before colonization.

Lagniappe
After reading Nobel's article, I checked this blog for references to Muir and was surprised to find that my 2009 Botanical Travels post had actually mentioned controversy related to indigenous people in Yosemite.

Posted by James Hayes-Bohanan at 9:29 AM