While I was a student at UMBC, I enjoyed many visits to the historic downtown district of Ellicott City, often ending up there after a day of hiking in Patapsco State Park (which some might recognize from  the very independent film The Blair Witch Project). During our most recent visit to see friends and family in the area, we took a ghost tour organized by the Howard County Tourism Council, and thoroughly enjoyed seeing our old haunts from a different perspective. 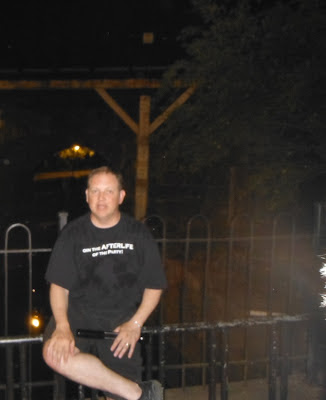 Our tour began around sunset, as the temperature settled back into double digits, and took us from the visitor's center up to the Judge's Bench (where a friend of mine once tended bar) and then down to the river-side railroad trestle that serves at the dramatic gateway to this charming town. The support pillar behind our guide shows the extreme water levels reached during various historic floods of the town. By the way, is that a ghost in the lower-right corner?

Throughout the walk, the history and geography of the town was interwoven with ghost stories, some more plausible than others, from the guide's own experience, hearsay, and ancient tales. The locational factors that keep ghosts nearby include the flow of water through and under quartz-bearing granite (making the entire town a kind of "battery" according to true believers), its sordid history with slavery and civil war, and solidly-built buildings of long vintage.

Very local granite is the main building material. Some structures are built directly on granite outcrops that form their main back walls, and almost all use massive blocks hewn from those outcrops. The edges of each block are lined with half-cylinder holes a few inches deep and almost an inch wide, where drills created perforations, along which rocks could be blasted apart. On the rock faces themselves, we were shown spots where such blocks had been taken away, and our guide pointed to a hole in which a drill bit was broken off. I could not see the bit, but my trusty camera could! 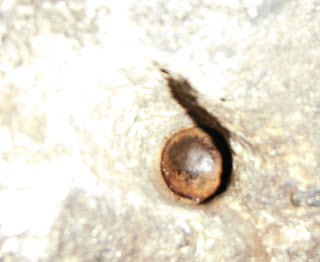 Whatever we might think of the stories shared on the tour, one recent story could be verified. Last September, a substantial retaining wall collapsed, and though injury was avoided, five cars were destroyed.
According to our guide, the cars are buried in the rubble, though it turns out that if they are buried, it is beneath additional rock brought in to stabilize the slope at a much lower angle of repose. I returned during daylight hours to photograph the stabilized slope ... and the ghost shop nearby!
The retaining wall is on the SW corner of Maryland Avenue and St. Paul Street. The photos above were taken from slightly different positions just to the south of the caboose shown on this aerial view.

The caboose, incidentally, is part of the B&O railroad museum. It is affiliated with the big railroad museum in downtown Baltimore, but it has the distinction of being housed in the oldest railroad station in the United States. The first thirteen miles of track terminated at this station, which is at the head of navigation of the Patapsco River. Any freight -- such as corn and tobacco -- that could be gotten to this location could then be transported by water to the Port of Baltimore and thence to the world beyond. From the establishment of Ellicott Mills in 1771 until the opening of the railroad in 1830, all of this commerce was by wagon and water.

When I lived nearby as a student, Frederick Road was my favorite among many that began in the center of Baltimore and could be followed mile after mile, in the path of early traders. The stretch of Frederick Road known as Main Street was built by the Ellicott Brothers, but is also sometimes considered among the first few miles of what was to become the National Road. Sources vary as to whether the road begins at this spot in Ellicott City, in the western-Maryland city of Cumberland, or somewhere on the Chesapeake Bay. Most do agree, however, that the original road has been upgraded and/or bypassed at various points by US 40 and I-70.

Posted by James Hayes-Bohanan at 8:49 AM