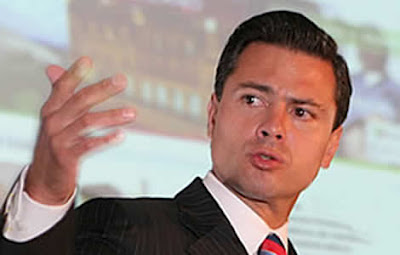 I hesitate to include this photograph of the dashing young president-elect of Mexico, in light of COHA's observation that media coverage of the recent political season has been as superficial as it was scant. Enrique Peña Nieto was, however, elected on Sunday with a substantial plurality, amid high voter turnout, and we should start to getting to know him. To catch up, I recommend three articles:

The Economist published The PRI is Back on Monday; it is the best introduction to the story. BBC and others are now reporting on the reluctance of the PRD candidate Obregon to concede the election. All Things Considered also discussed the return of PRI as The Old is New Again, but inexplicably used the term "iron fist" to describe what was a much more complicated seven decades of rule.

I recommend reading and listening to these before reading more in-depth analysis from the Council on Hemispheric Affairs. What a Return to a PRI-Dominated Government Would Mean for Mexican Democracy was published just a couple of days before the election, and examines the apparent repudiation of the PAN approach to drug cartels. Although PAN's Calderon took an approach generally favored in Washington, it clearly did not work, and did not require enough of Presidents Bush or Obama. With over 50,000 people dead, Mexico seems to be ready for a different approach.

Once the election is truly settled, attention can turn toward determining the new balance of priorities in Mexico, particularly in its northernmost states. For more of my thoughts on the challenges facing Mexico and its northern neighbor, see my recent posts No se Olviden Mexico on Environmental Geography and Migration and Faith on First Parish Bridgewater.

Posted by James Hayes-Bohanan at 10:46 AM