Morning Walk About the Hub

The map above from Orange Smile is a bit out of date, but is just the right scale for looking at the walk I took Thursday morning, from South Station over to Tyler Avenue in Chinatown, where I picked up a visa for my daughter's upcoming service trip. The train schedule was such that I could return home right after my errand, or I could spend a couple hours exploring. As Pirsig would say, I had a choice between "good time" and "good time."

Three factors guided my choice in the right direction -- it was a warm but not humid morning, perfect walking weather; I could get to coffee shops in the North End; and there was some chance of seeing Tall Ships in the area. I did not have enough information to find the last of these, but I'm glad I took advantage of the weather and I did in fact enjoy a cappuccino in a very local cafe.

I emphasized walking over photography, so I did not even take any photos in Chinatown itself, but I could not resist snapping a few of the things I did notice. 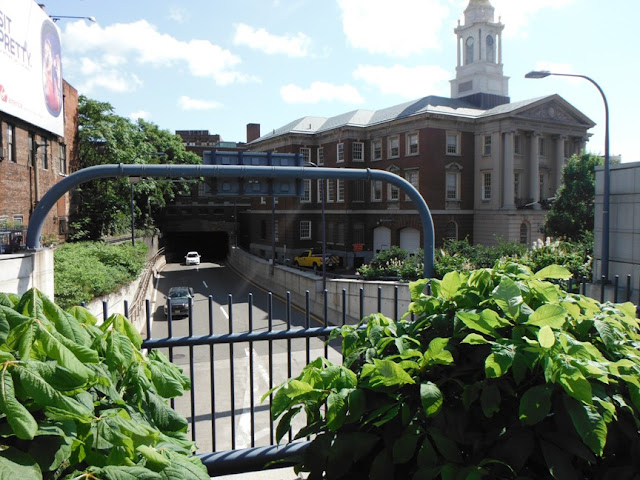 Regular readers of this blog will know that I am reluctant to second-guess the work of other people, or to assume that it is as easy as it looks. I could not help thinking however, that the tunnel administration building that overlooks the Callahan and Sumner Tunnels might reflect a bit of bureaucratic over-capacity. Vehicles parked in front of the building suggest that the tunnel administration is part of the Turnpike Authority, a redundant highway department that our governor tried in vain to remove during his first term in office.


Completion of the famous/infamous Big Dig means that Boston has even more tunnels than it did when this building was erected. Conservatively estimated at $14,800,000,000, the Central Artery/Tunnel Project created the only tunnel I know of with exit and entrance ramps inside the tunnel. It remains enormously complex, with lawsuits and repairs likely to justify the employment of buildings full of people in perpetuity.


UPDATE: A couple days after I posted this, the true cost was calculated at more than $24,000,000,000. This is literally more money than has ever been spent building anything. Ever. 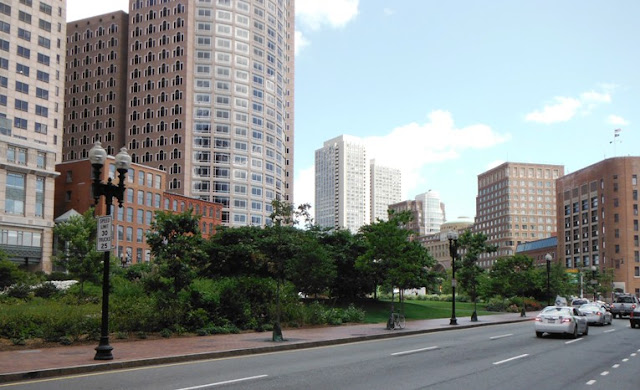 It may all have been worth it -- it certainly was for the crooks from Bechtel who drove the cost ever-skyward but have avoided liability for the project's many flaws. It may also have been worth it for the city as well, though, as it removed the elevated highway shown on the map above (running northwest from the Aquarium, and separating the North End from Downtown). Some details of what to do with the resultant open space were not resolved prior to project completion (even though it was years overdue), but for the first time I noticed some improvements in place. The (Countess) Rose Kennedy Greenway replaces some of the ugliest highway miles in the country (incidentally, named for her father) with beautiful gardens, walking, and gathering spaces. I met tourists who were enjoying the walk as they searched for a gathering of food trucks that would not have been possible prior to the Dig. Is all this worth the million dollars or so it cost per linear foot? I'm not sure; but now that it is in place, it behooves us all to enjoy it. 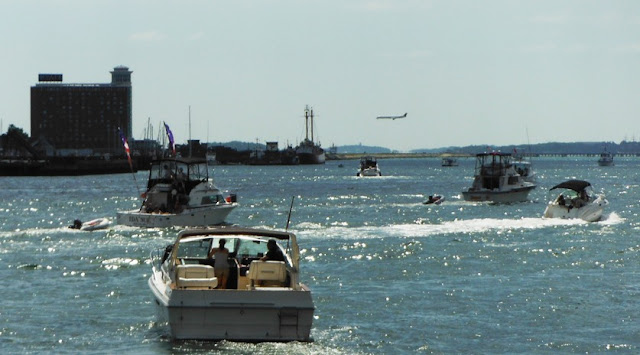 I missed the tall ships, though I did see a sort of "parade" of pleasure craft that seemed to be moving with or toward some sort of nautical event. Not wanting to delay further, I decided to enjoy the view without pursuing those bigger vessels. In the process, I got to see a few airplanes approaching Logan Airport from the south. Being built -- as much of the city is -- on artificial fill, the runways end remarkably close to the water. My first daytime landing at Logan a number of years ago was memorable for the impression that we were about to ditch the plane.