A Morbid Sense of Place

By definition, people use vanity plates to convey something -- usually a single something -- about themselves, and as a geographer I notice when someone chooses to make that one thing a connection to a place. I am not sure I would have understood the significance of this breath-taking example from Rhode Island, were I not at the place when I saw it.

The place is not even in Rhode Island, but in a nearby corner of Massachusetts. we found this car parked behind the Lizzie Borden Bed &Breakfast / Museum, at the conclusion of a morbidly delightful tour.


Yes ... in case you are wondering, the site of the brutal 1892 murders of Abby and Andrew Borden is a B&B, where the more expensive rooms are those closest to the crime scenes. The breakfast menu resembles that served to the family just hours before the stepmother and then the father were killed, with the exception of bad mutton. Andrew Borden's thriftiness was so profound that meat purchased early in the week was eaten all week, so that by that Thursday in August, the mutton may have contributed to the motive for what almost certainly was an inside crime.

For the record, Lizzie Borden was acquitted of the murder of her stepmother and father, but few people believe she was wholly or even partly innocent. She might have benefited from the common presumption in those Victorian days that women could not commit murder. Indeed, she was not questioned right away, even though she was the only person in the house without a strong alibi. The alibi of her paternal uncle (in the house on a hastily-arranged visit), by the way, may have been a little too strong: he knew the names of six priests he met on a trolley shortly after the killings.

Historians know this family and household to a level of detail that seems disproportionate to their modest prominence in the community. Detailed testimony and crime-scene photography has allowed the museum managers to furnish the house with a high degree of accuracy in terms of arrangements, designs and patterns, though not necessarily in color choices. Detailed inquests and testimony allow the guides to retell the stories with a great deal of specificity; even though doubt continues to shroud the basic question of who did what, it is fairly well known what was done that August morning. 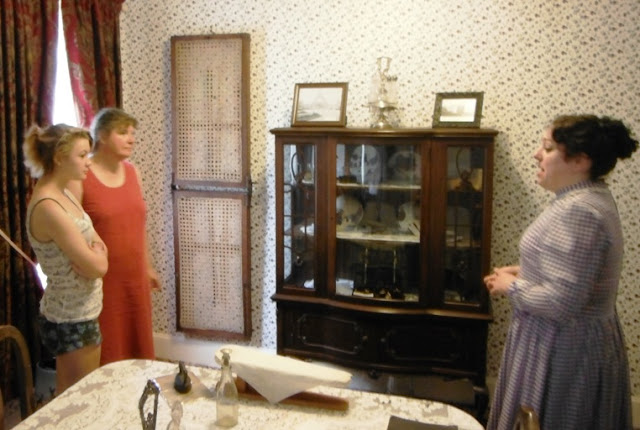 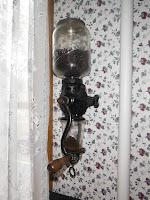 Among the creepier details are the casts of the skulls (not the original, thankfully) on display in the dining room, along with the stretcher used for the autopsy. I thought the cane wicker was too weak for such a purpose, but our guide pointed out that it was very practical for drainage. We declined her offer to show us autopsy photographs.

Among the many period details I found intriguing, the one of which I was most covetous -- perhaps not surprisingly -- was the coffee grinder in the kitchen.

This is a B&B whose customers only get to stay one night, by the way, not that I imagine many people wish to do more than that. Because tours operate on the hour from 11 to 3 each day, check-in and check-out are strictly enforced around that schedule. 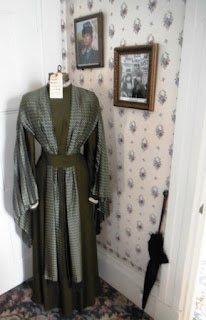 Another interesting memento is the dress worn by Elizabeth Montgomery in the 1975 television movie The Legend of Lizzie Borden. During the filming, according to our guide, the actress (better known for Bewitched) found out that she was a cousin of the famed Fall River resident she was playing.

My wife Pam remembers that this show was her first acquaintance with the story, but I had never heard of it until yesterday. I learned of the crime the same way most people do, I suspect, by way of the morbid couplet:

Lizzie Borden took an ax and gave her mother forty wacks;  When she saw what she had done, she gave her father forty-one.

Among the many details gleefully shared by our guide is that the victims suffered "only" 18-19 and 11 blows with a hatchet, respectively.

A neighboring sign business, by the way, offers a different kind of sense of place for the neighborhood. All of the portraits on the side of Lavoie & Tavares Painting & Decorating are of deceased heroes, but only two of the six met violent ends. 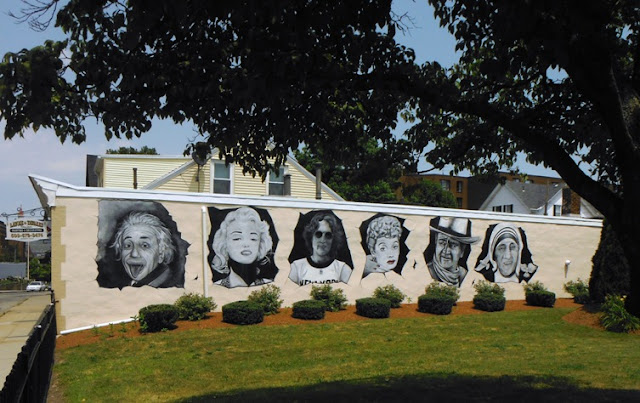 Posted by James Hayes-Bohanan at 2:05 PM