The Film Notes page I created for my students provides a lot more detail about the film mentioned below, with links to resources related to specific things mentioned in the film. Feel free to use them while watching The Guide.
I share a lot of bad news on this blog, and here is a bit more: we have so damaged the planet that it is no longer sufficient to seek ways of avoiding further damage through minor efforts such as recycling bottles and cans. If the future is to be anything but bleak, we must engage in restoration, not merely protection.

But here is some good news: restoration is exactly what some people are doing, such as the people in and out of Mozambique who are restoring the Gorongosa National Park.

Our Vision from Gorongosa National Park on Vimeo.

People have lived in the Gorongosa area for 300,000 years -- 10,000 human generations. A little over a century ago, the need to protect it from overuse was recognized, and for most of the 20th Century its natural communities did benefit from preservation efforts.

In recent decades, however, war in Mozambique harmed and endangered both the natural communities of Gorongosa and the human communities closely connected to it. The Gorongosa timeline outlines the place's story from pre-history through colonization to protection and conflict.

Most recently, a positive story has emerged, as local and global people are working together to restore the park's ecosystems by healing its connections to surrounding human communities. The results include an ecotourism initiative that is much deeper than most, which is explored in The Guide, which is the story of the relationship between Gorongosa neighbor Tonga Torcida and the imminent biologist E.O. Wilson.

The global importance of the work in Gorongosa and in similar "ark" environments throughout the world was described by E.O. Wilson himself in the February 2002 article "The Bottleneck." (This link is to the Scientific American site where the issue can be purchased; the article is readily available in libraries as well).

When I started studying demographics in the 1980s, we were concerned that human population was experiencing exponential growth that was exhibiting a "J-curve" trajectory. That is, the compounding of population growth was leading to increases that seemed destined to accelerate for decades to come. Around the turn of this century, however, negative feedback processes began to slow that growth. A pattern that seemed to have no end in sight now seemed to have an end point -- a likely plateau of human population at around 9 or 10 billion in the middle of this century. This is known as "S-curve" or sigmoidal growth; we are currently in a long period of population that increases at a decreasing rates. 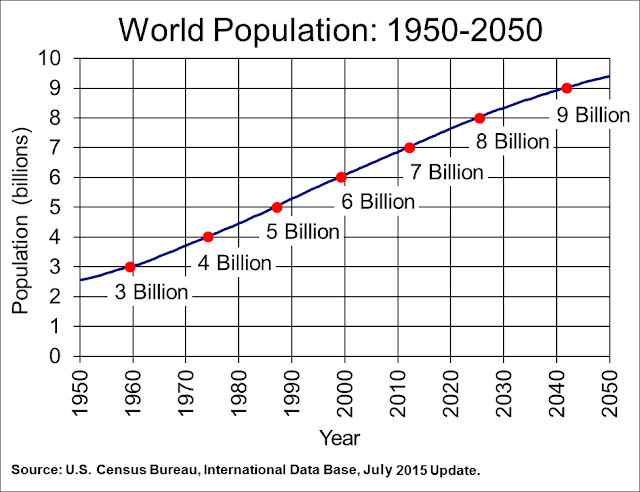 (Note: a year after this post, I wrote A Decreasing Increase to explain the above graph in more detail. It is a reality of demographic momentum that is difficult to grasp at first.)
For those concerned -- as we all should be -- about providing resources for the growing population, this is good news. It means that our task, though daunting, is not infinite. If we can find a way to support ourselves sustainably until 2050, we should be able to do so after that date. In The Bottleneck, Wilson makes a corollary claim -- any species and wild lands that we can protect until 2050 have a reasonable chance of being protected for the long term.

I watched the full version of The Guide documentary shortly after writing this post, and watched it again after I read a new story about coffee (see below) on the margins of the park. (The preceding link points to filmmaker notes, but no longer to the film itself; see the HHMI YouTube version to watch it.) The film is a welcome respite from the bad news that assails us daily. Not only does it offer hope and beauty, but it lets the viewer witness the rapidly growing friendship between an old New Englander and a young African -- two men from vastly different worlds who find they have a tremendous amount in common. Just try to get through 40 minutes without shedding any joyful tears!

Among the great treats -- E.O. Wilson had never been to sub-Saharan Africa before the age of 82, and yet is able to identify the genus and species of every critter brought to him by local kids -- except those previously unknown to science.

I hope to have the good fortune to visit this park some day. Because the history of colonization connects Mozambique to Brazil, I do speak the local language.

My well-known interest in all things related to the geography of coffee means that friends regularly forward stories to me that I might otherwise miss. Most recently, it was the coordinator of our campus study-abroad programs who shared Coffee growers help reforest Mozambique's Mount Gorongosa, a story by Andrew Meldrum by way of AP and CBS.

Although the photograph belies claims that the coffee is shade-grown, this is nonetheless a potentially positive story of environmental protection and community development; as The Guide makes clear, the two are intricately connected. The coffee trees themselves provide an important ecological service as a buffer between the carefully protected park itself and surrounding lands with no protection from hunting or clearing.

The buffer effect is much greater -- and the coffee much better -- if genuine shade-grown methods are employed. I have sent a message to the person directing agricultural partnerships around the park, to see if he can provide more details about the coffee cultivation. Mozambique continues to be a very small producer of coffee, with the entire country growing less than some individual farms in other countries. For it to succeed as an economic-development project, the coffees of the Gorongosa region would need to be grown with attention to quality and perhaps distinct varietals.

Posted by James Hayes-Bohanan at 11:13 AM