Food is an important way that people identify with place. This is why it is best to avoid chain restaurants when traveling!

This story about nopalitos took me right back to Tucson, where I lived from 1990 to 1994. Nopal is the prickly-pear cactus, and as with several other food items, it is common to use the diminutive suffix in the name. The prickly-pear is, I have been told, the only cactus that grows in all U.S. states. I have not confirmed this, but I learned this when looking at them in Kentucky, which is not known for its cacti.

Despite its broad geographic range, prickly-pear is certainly more abundant in the Sonoran Desert than anywhere else I've been.

This story is about the green part of the plant, but the fruit is also quite interesting. During our 1989 summer in central Mexico, we came upon an ice cream stand whose flavors included "tuna" ice cream. What? What? This could not be, and indeed it was not. "Tuna" is the Spanish name for the fruit of the nopal. The Spanish word for tuna, by the way, is "atun," which I have not seen in ice cream so far!

The tuna fruit is a delicacy. We once sent a jar of tuna preserves to friends who were hiking the Appalachian Trail. They picked it up at a trail-side post office, and ate it directly from the jar -- no spoons, even!

Wherever they go, geographers try to learn about local food (and drink). This NPR segment is a terrific example of geography on the radio!

See my mas sobre nopales post for information about the significance sometimes attached to the nopal.

During a travel course to Costa Rica in January 2020, we visited the renowned CATIE research station, where hundreds of coffee varietals are curated, studied, and even invented. Although famous for its vital research in coffee, it is also an important site for the protection and development of other plant varieties, especially fruits. I was so impressed by a nopal I found there (it was not fruiting, but the light green segments indicate vigorous recent growth) that I decided to make a Nopal-en-la-Frente selfie! 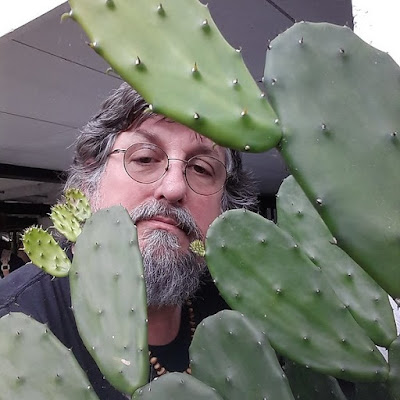 Posted by James Hayes-Bohanan at 11:32 PM