Last week, unnamed Bridgewater "officials" permanently closed the skate park on Bedford Street. According to an August 11 newspaper article, they were "forced" to do so, but I would argue that they had choices, and simply chose the most expedient option. The subaltern position of the park's primary patrons -- relative to those who participate in more mainstream sports -- undoubtedly contributed to the course of action that was chosen.

What does this have to do with geography? Everything.


The Bridgewater Recreation Commission, at their [sic] meeting on August 4, 2008, unanimously voted to close the Skateboard Park effective August 5, 2008 due to recent acts of violence brought to the attention of the Commission by the Bridgewater Police Department. The Skateboard Park will remain closed until the Recreation Commission has the resources available to ensure a reasonable level of safety for its users.

Neither this release nor contemporary reporting in local media suggested that a permanent demolition was being considered. As of today, the commission's web site makes no mention of the demolition, so no explanation is publicly available. The only resource mentioned on the commission's page is a rather expensive, privately-operated skate park in New Hampshire, nearly two hours away by car. 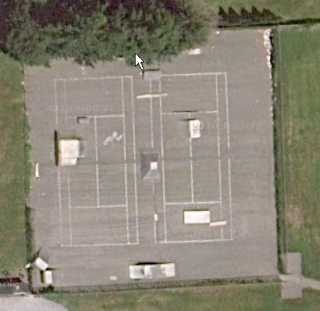 The press release indicates that the Recreation Commission did not have sufficient resources to operate the park. Given the scale of public spending on the commissions facilities and activities, the real question is not whether resources are available, but whether skate-park users are a priority.

The skate park had become a problematic, contested space. Activities were taking place there that the community could not tolerate. This is common, and communities can address the problem in a variety of ways, such as community policing, neighborhood watch, or involving users of the space in creating a more positive sense of cooperation around it. Unfortunately, in this case, a much simpler solution was found: those entrusted with the power to do so have simply erased the space. The space is still there, of course, but the constructed space has been eliminated. This tiny corner of the heavily-used Legion Field complex (see below) is likely to be replaced with space that will foster conformist activities at the expense of transgressive expression.

I want to be very clear here: I do not condone the vandalism and assault that triggered the park's closing. In fact, I worry that the decision to close the park will simply displace the illicit activities to other parts of the town, or to other towns. The behavior itself has not been addressed; if anything, a level of alienation has been created that makes such disturbances all the more likely.

In case the abrupt demolition did not send a clear enough message, the commission has really added insult to the park's former users by posting the link to the far-away, private skate park. It is not willing to spend public resources on this sport, and it provides a referral that is useful only to those with substantial private resources.

In a town that has sharply reduced its library hours and continues to over-crowd its schools, the vice is tightening on young people, and we should not be surprised by any resulting increase in the sightings of sullen, roaming teenagers.

Posted by James Hayes-Bohanan at 11:02 AM