The first time I heard Randy Newman's "Louisiana 1927," it was the version at the beginning of Aaron Neville's Warm Your Heart CD, and as I had it on the background, I did not realize at first that it referred to events from the better part of a century ago. It turns out that President Bush was not the first to view flooding in Louisiana and fail to respond. Randy Newman discussed the song in an NPR interview shortly after the original events were so eerily echoed in the aftermath of Hurricane Katrina. His interview is worth hearing, but the song itself is essential!

Fatal Flood is an American Experience documentary that tells the 1927 story from a different perspective. In Greenville, Mississippi, flooding resulted from a broken levee and laid bare the deep racial divides in what was essentially a feudal society at the time. The story is also told in the National Geographic Great Flood article. 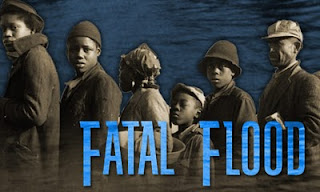 As Alexis Madrigal explains in the excellent What We've Done to the Mississippi River, the name is actually no longer accurate. Over close to three centuries of modifications, the "river" has become a largely engineered system that is tied in numerous complex ways to 41 percent of the middle of the country.

A particular story about these engineering efforts that has long fascinated me, and being reminded of it again this weekend led me to spend much of the past few days exploring various aspects of Mississippi River flooding. The story is that of Old River Control. The first book I ever read about the environment -- and one that really changed my life -- was Encounters with the Archdruid by John McPhee (I'll need to blog about that and about my own encounters with the Archdruid some other time.) The three stories in McPhee's The Control of Nature really cemented my understanding of environmental geography as the intersection between human endeavor and natural process.
Of the three, the story "Atchafalaya" (available from here from New Yorker magazine) has been the most interesting to me, especially since fluvial geomorphology was a major part of my graduate work. As McPhee explains, Old River Control is a critical structure among the many that intend to keep the Mississippi River in a constant position. As illustrated in the 1944 map above, levees contain the river in a position that is just the latest of many it had occupied in previous years. A similar process operates near the mouth of the river, where distributaries shift constantly as both water and sediment are carried toward the sea. For decades, the path of least resistance would be for the main stem of the river to shift in such a way that most of its flow would be carried through the Atchafalaya Basin.

As I alluded above, this was all brought back to me by Remaking the Mississippi, an interview by Bruce Gellerman with John Barry, author of the book Rising Tide, the Great Mississippi Flood of 1927 and How it Changed America. I recommend listening to the interview as perhaps the best introduction to this complicated subject.

Posted by James Hayes-Bohanan at 11:56 AM