We do not like to admit that coffee has become an obsession in our family, but it is true that we seem to be especially prone to random coffee connections. For example, as we casually stopped by the used-book sale our church has each week at the local farmers' market, my favorite librarian noticed a book with coffee in the title. We could not really tell what it was about, but it was in our bag right away, and I finished the book later on the same day I bought it -- something I never manage to do!

The book is Margaret Jensen's First We Have Coffee. The paperback we picked up is a sixth printing of the (c) 1982 edition. Apparently later editions are still available, with at least two different subtitles. Our version has no subtitle, but the tagline "Treasure the romance, mystery, tragedy, comedy and faith in these true life stories of an immigrant family." 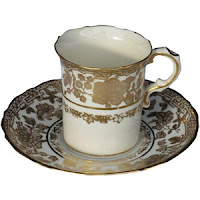 I am not so sure about the mystery in this tale, but the other elements are woven throughout this story of the author's family. From her mother's arrival from Norway as a teenager at the beginning of the twentieth century to the deaths of her parents in the 1970s, it is a family journey from small towns to prairie to big city and ultimately to the rural South. The "romance" is of a type that is subdued and deeply embedded in archaic gender roles. It is interesting that some online reviewers find this to be the most rewarding and inspiring part of the tale. Most of the tragedies are the kinds of losses and setbacks bound to occur over three-quarters of a century, though some might see the persistent privations as tragic.

The "immigrant family" theme is as much about the family's movements from town to country to city within North America as it is about the international migration. It is interesting to note, however, that the Norwegian communities in the book used their native language for decades after having learned English, especially as they came together for worship or life passages. This is a fine contradiction to the all-too common assumption that immigrants who speak another language do so only because they lack the ability to speak the language of their new home.

The "comedy" woven throughout the tale is of the gentle sort I would more likely call humor, in the tradition of Samuel Clemens or, more aptly, Garrison Keilor. Similarly, through the first 150 pages of the book, Jensen's nostalgia for the spare, spiritual, and musical days of her Norwegian Baptist upbringing brought out my own memories from my own childhood. Though separated by decades and many miles, we shared some experiences and even some favorite hymns, such as A Mighty Fortress and Blessed Be the Tie. (The last 40 pages of the book are about her experience of her parents as adults, and are burdened, in my view, by needlessly flowery prose, poor poetry, and self-conscious piety.)

The stories of her youth, however, are enjoyable and though coffee is almost never the focus, it is mentioned hundreds of times in many contexts. Coffee is for rising, in the morning, resting in the evening, and making a house a home. Most importantly, coffee is a catalyst for conversation. Almost any dialog in the book -- and certainly any important dialog -- is lubricated by coffee:


I chuckled to myself as I remembered a handsome minister from Norway, and his 'prayer meeting' with a farmer's daughter. I had inadvertently stumbled into the room in the middle of a not-so-holy kiss. One word to Mama sent an S.O.S. to Norway, and the secret code between wives resulted in action. Sooner than expected, the minister's adorable wife arrived on the scene. The curly-haired, saucy-eyed [saucer?] wife charmed her way into the hearts of everyone, especially Mama. The wife never made reference to the reason for the surprise visit, except to let the farmer's daughter know how much the wife had missed her charming husband. Chuckling over a cup of coffee, Mama and the wife agreed: 'You do your part, God will do the rest.' The subdued husband and his sparkling wife blended together lie coffee and cream. When Papa spoke highly of that devoted couple, Mama smiled over her coffee cup.

'There are some things you tell, and some things you don't tell,' Mama had said to me when I told her of my abrupt interruption of the hungry kiss. Her look told me that I had been entrusted with a secret -- that we were to keep this as our own.

In another case, it was a young wife whose eye was wandering, so "Mama took the wife aside. No one but those two knew what was shared over afternoon coffee. The wife returned her loyalty to her rightful lover, her husband." (The sensuality of coffee is, in this case, of only the most respectable variety!)

Coffee was also part of moving beyond any unpleasantness; this passage -- following a death in the family -- is typical: "Mama washed her face, combed her hair, tied on a starched apron, and put on the coffee pot."

Garrison Keilor's tales of Norwegian Lutheran frugality on the prairie (and my own spare upbringing in Virginia) pale in comparison to Jensen's account of her arrival in Chicago as a teenager from the Canadian prairie:

The table was set for 'coffee' and three dishes, each containing a huge peach-half, were set before us. Taking charge of my siblings, as I'd been commanded, I promptly removed two of the dishes and proceeded to divide the one remaining peach-half in three parts. 'We always divide, I said, 'and then we can have peaches for two more days. We cut on orange in six pieces,' I added.

Although coffee is mentioned on nearly every page of this book, it is mostly in passing, so that it permeates the stories without being addressed directly. A few passages suggest that percolation (egad!) was the favored means of preparation, and once coffee with sugar lumps is mentioned as a Norwegian "national pastime." But in 185 pages and close to a thousand uses of the word, little else is revealed. This nonchalance is itself the main message about the geography of coffee in Jensen's immigrant experience.

Posted by James Hayes-Bohanan at 3:17 PM