NOTE: In March 2013, I realized that I had not finished this post, most of which I wrote in June 2012, at the time of the coup in Paraguay. I rediscovered the draft as I searched my blog after reading Simon Romero's rather odd interpretation of Brazil's response to the coup, which contrasts strongly with his article cited below. 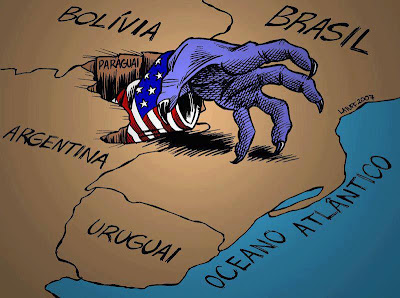 This cartoon is currently circulating through social media in Brazil (where I am fortunate to have quite a few friends, mostly geographers) and may be a bit perplexing for most U.S. observers. It will be all the more perplexing because it expresses indignation about the U.S. role in events that took place just a few days ago, but far from the attention of most people in the United States.

Aside from a very lucid description by Simon Romero of the New York Times (and a few stories on NPR, to be fair), last Friday's ouster of Paraguay's first democratically-elected president was widely unnoticed. Two days after events that many in the region are comparing to the 2009 coup in Honduras, the U.S. State Department web site has no indication of the U.S. position, aside from the brushing aside of a reporter's question during the daily State Department briefing on Friday. Neither the Miami Herald nor the Los Angeles Times include any mention of the crisis at all, even though both of these papers usually cover Latin America in some depth.

Several factors explain the vast differences in attention. First, U.S. economic interests in Paraguay are comparable to the interest we would have had in Kuwait, had its chief export been broccoli. That is, Paraguay does not have vital strategic resources for the United States, though its water and hydroelectric resources are tremendously important with the Southern Cone. Second, although Brazilian observers have coined the term "golpeachment" (from golpe for coup) in reference to last Friday's events, it can be plausibly argued that the removal of Paraguay's president proceeded within the requirements of the laws that provide checks and balances over the president. As Romero points out, enhanced oversight of presidents was actually a requirement for democratic progress following the very long tenure of Stroessner. 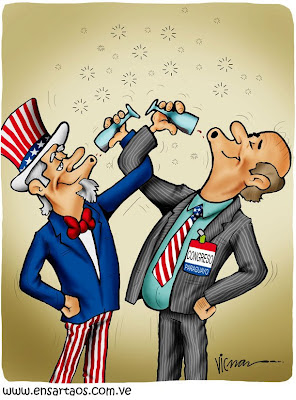 Two articles (in Portuguese) on the Brazilian political site Passa Palavra explain some of the Brazilian connections to the conflict that precipitated the impeachment. The articles -- Massacre de camponeses no Paraguai  (Massacre of farmers in Paraguay) and Guerra no Paraguai, um conflito brasileiro (War in Paraguay, a Brazilian conflict) explain that Brazilians own many of the very large estates that peasants have tried to occupy.

More commentary on the geography and politics of Lugo's ouster from COHA, BBC, and NY Times:

Posted by James Hayes-Bohanan at 11:32 AM