The Most Important Town in the Americas

As I have written before, political self-determination has come very late to Bolivia, very late indeed. After the long night of colonization and post-colonial rule from afar, self-determination is taking hold, and the people are benefiting from the riches of their own land for the first time in 500 years.

I would argue that the turning point for democracy in Bolivia was the resistance in Cochabamba to Bechtel, a U.S.-based corporation that really was trying to take possession of the region's rain. As I wrote last summer, however, the people of Cochabamba did succeed in taking back the rain from Bechtel, but the spatial injustice of climate change means that they are still dangerously short of water.

All of this comes together brilliantly in También la Lluvia (Even the Rain), a 2010 film that tells the true story of Cochabamba through the fictional story of a film crew using the region as a low-cost location for a film about the original Conquest.

The result is a nuanced and many-layered examination of post-colonial structures of domination that privilege not only the obvious villains such as Bechtel but also those of us -- such as the film-within-a-film filmmakers but also academics and activists such as myself -- who can choose how and when to become involved in liberation.

By making the explicit the connection between the original Conquest and the ongoing condition of Conquest, the filmmakers bring to mind the words of Subcomandante Marcos (whose 60 Minutes interview from the 1990s is a great introduction), which were made famous by Manu Chao: "el larga noche de los quinientos años" (the long night of 500 years). 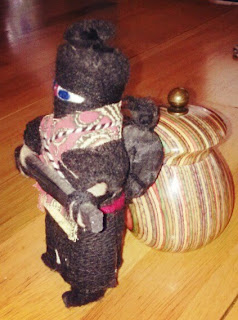 After reading this post, my favorite librarian and fellow Latin Americanist Pam reminded me of this doll, which we must have purchased during our 2008 visit to Guatemala. As Ed Bradley indicated in the interview mentioned above, about 30 percent of the Mayan soldiers in the Chiapas uprising were women, and Mayan women were equally involved in the long struggles for land and dignity in Guatemala, as described by Rigoberta Menchu.

The same was true of the Revolution that created the modern Mexican state, as it was in the Sandinista uprising in Nicaragua generations later.

Bringing this back to Cochabamba, I am not sure how women were involved in that smaller-scale standoff, but I do know that my Quechua friend Emilia appeared to be quite handy with the huaraca I purchased from her.

Posted by James Hayes-Bohanan at 11:53 PM