A Man, A Plan, A Canal: Nicaragua?

As its name implies, The World from Public Radio International is a great source of journalism integrated with geography, exemplified by a recent story about my winter home-away-from-home, Nicaragua.

A short report about proposed canal projects in Nicaragua exemplifies several interesting connections among economic development, environmental protection, geoopolitics, and global trade. (My recent about the Panama Canal and public health provides more information about these connections and more.)

A bit more than a century ago, the United States simply chose the most expedient route across the Central American isthmus, creating not only the Panama Canal but Panama itself in the process. Teddy Roosevelt aided those who wished to make the area free of Colombia, in exchange for their support of the canal. 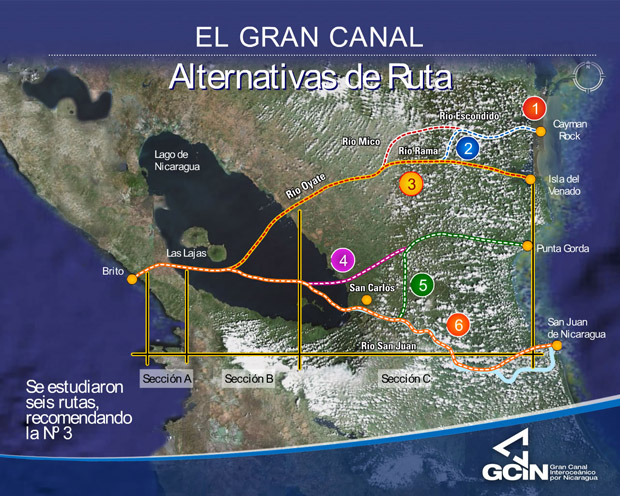 Today, investors from China are hoping to build a series of canals across Nicaragua, which is three times wider than Panama but includes a significant inland waterway. In supporting the proposal, the Ortega administration cites the creation of much-needed jobs and the $10 million annual payment the investors would make to the country. Though the Ortega administration describes the payment as "serious money," these gains would be trivial in comparison to the disruption the canal would create along any of the six proposed routes.

Despite an error in the reporting, all of the routes would cross Lake Nicaragua as well as sensitive wetlands in the east. More than anything, the project reveals the lack of political power exerted in the sparsely-populated Afro-Caribbean portion of the country. The gains from the project, though few, would likely accrue far from the negative impacts. Those who think that Daniel Ortega is still a socialist are simply not paying attention to stories like this one.

Some may remember the 2010 dispute between Nicaragua and Costa Rica over the depiction of a border region on Google Maps. When I arrived in January 2011, I learned that this dispute was taken quite seriously in Nicaragua, as a matter of sovereignty and national pride. The potential of a canal project to disrupt natural environment of the shared Rio San Juan was an important but under-reported aspect of that dispute.

Posted by James Hayes-Bohanan at 7:09 AM