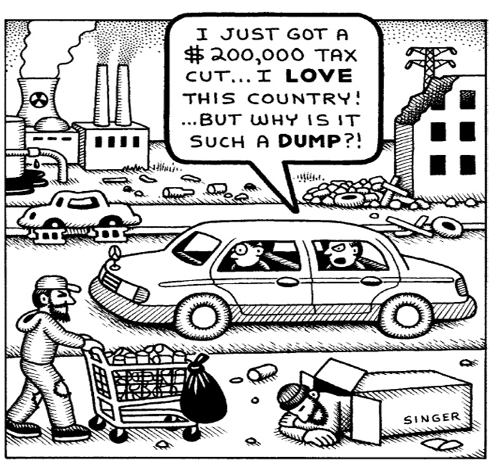 This cartoon is taken from the opening pages of Spirit Level, a 2011 book in which Kate Pickett and Richard Wilkinson describe the ways in which excessive inequality lowers the quality of life -- not only for the disadvantaged, but for those at the top of the economic pyramid.

As I have argued elsewhere, low taxes have become a political fetish -- a perversion damaging even those who think they are pleasuring themselves with the tax code and market interventions that concentrate wealth.

Wait ... why is there a pink unicorn in this post?

Because a pink unicorn is just as common as a free market. Many occupy the top of an economic system that they think of as open and fair, but that actually include structures that benefit them in subtle ways. Others at the top of the economy know this very well, and manipulate the political process to enhance such structures.

As Pickett and Wilkinson show, however, those manipulations ultimately damage not only the poor and the middle class, but even the wealthy themselves.

Posted by James Hayes-Bohanan at 8:42 AM