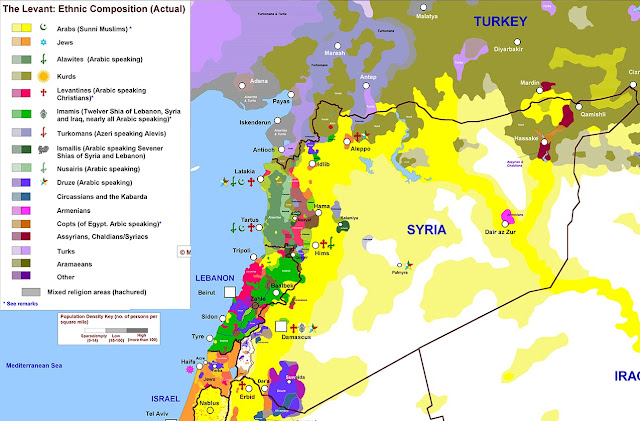 When in doubt, look at a map. If the situation in Syria were simple, it would have been resolved by now. Syria is a country drawn by arbitrary borders than enclose rival ethnic, religious, and linguistic communities. The distribution of political power among these communities is often imbalanced. And Syria is in a neighborhood -- the Levant -- in which this sort of geographic complication is common, but nonetheless dangerous. Max Fisher describes the background and importance of this map in more detail in his Washington Post blog entry of August 27, The One Map that Shows Why Syria is So Complicated.

I found the map as a link in his more recent post of August 29. In 9 Questions About Syria You Were Too Embarrassed to Ask, he provides information that is more specific about the current question facing the United States of whether, why, and how to intervene in Syria's terrible civil war. Far from uplifting or encouraging, he does explain how this truly is a conundrum, with no easy answers. He cannot address every nuance in such short articles, but these are very good places to become better informed about Syria.

These articles prepare the reader for another thoughtful piece, written by Jim Walsh for WBUR. His title also acknowledges the complexity and the importance of deicsions being made in Washington, London, Paris, and Moscow at the moment: So Many Questions, So Few Clear Answers on Syria and Chemical Weapons.

Posted by James Hayes-Bohanan at 11:48 AM