Their Therapy, Our Nation 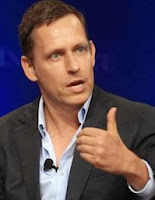 Today's Boston Globe carries two articles about two billionaires who are trying to work out some deep internal conflicts. Unfortunately, they are working them out on the rest of us, using MIT as a base and the whole country as their therapy couch.

First is PayPal founder Peter Thiel, who is offering antischolarships -- $100,000 awards to bright young people, as long as they commit to stay out of school. He has his reasons, but mostly he is working out his own internal tensions between the fact that higher education made him what he is and the feeling that he wishes that were not so. Rather than work this out on a therapist's couch, he is grabbing a lot of attention (and he got mine, unfortunately), by paying a few people to opt out. If in the process he encourages many more to do the same -- but without his money -- what kind of safety nets would he support for them?

Second is Tea Party co-founder David Koch, who dropped $20,000,000 on a day-care center because the plight of MIT lab assistants without good day care brought a tear to his eye. I join Joan Vennochi in applauding his generosity, but in seriously objecting to his desire to strip away social safety nets from people who are not directly connected to him.

The cognitive dissonance that Vennochi identifies is also a moral lapse. Koch is simultaneously generous and miserly. In a supposedly pragmatic country, his is a contradiction that is steadfastly supported by a vocal minority whose objection is on purely theoretical grounds. Generosity is great, they argue, but it should all be individual and voluntary, rather than communal.

Posted by James Hayes-Bohanan at 9:20 AM