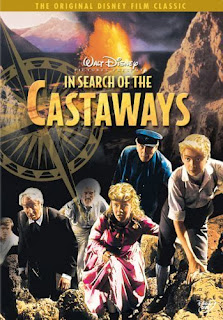 To keep things simple in our household, we add films to our Netflix queue as we become interested in them, and we then watch them in pretty much that order. This is a low-maintenance approach that requires far less energy than constantly revising the queue to somehow optimize the order in which we watch things. The only down side -- and this definitely qualifies as a "First-World Problem" -- is that we often receive movies and have no idea why we requested them, or even which one of us made the request.

This was certainly the case with In Search of the Castaways (1962) whose Netflix cover reads:

Two children search for their castaway father in this Disney movie based on Jules Verne's novel Captain Grant's Children. Mary and Robert Grant (Hayley Mills and Keith Hamshire) know their father must still be alive, because they have a message in a bottle telling them where he is. With the help of a professor (Maurice Chevalier), they set off to find their father, encountering gigantic birds, volcanoes and a gunrunner along the way.

It looked like our kind of movie -- one of our favorite child actresses on a campy adventure, and nautical to boot. But what exactly caused us to seek it out -- or which one of us did so -- was not clear. Only a few minutes into the movie, though, we realized that this was definitely up our cup of fur, as they say.

Maurice Chevalier is the only actor to appear above child star Hayley Mills in the credits. Very early in the film, he announces that he is a "professor of geography" at the University of Paris. I am certain I have never heard this line in any other film; it might even be unique in the history of cinema.
Of course I was completely captivated from this point forward. Even if the character were a geography imposter --as I erroneously suspected for much of the film -- the mere assertion of geographic credentials was enough to hook me. A couple of scenes later, this film really showed its geographic muscle. The 37th (South) parallel of latitude figures almost as a character in its own right.

It is not giving away too much of the plot to say that an effort to rescue Hayley Mills' ship-captain father results in a transect along most of that parallel. I pulled a world atlas off the shelf early in the proceedings, and flipped through pages as we followed a hopeful crew across three of the world's oceans.
The film provides some good illustrations of geography as it relates to cartography and navigation; the transect pursued by our heroes provides an interesting land crossing of the Southern Cone, with the most cursory of landings on other landmasses. Seventy percent of the earth's landmasses are in the Northern Hemisphere, and in the mid-latitudes the comparison is even more dramatic; a transect at a comparable northern latitude would require horses and trains at least as much as a ship, but these travelers spent most of their time on or near water.

Sadly, the physical and cultural geography of the film is not quite what it could be. Natural hazards abound, but usually manifesting in ways that range from implausible to impossible. Some effort is made to represent local people encountered on the journey, but usually in ways that exoticize and reinforce negative stereotypes. I was reminded of the true story of the whaleship Essex, whose crew assumed that indigenous islanders would likely be cannibals. Thankfully, this is a Hayley Mills film, so no actual cannibalism is encountered that would put those fears in a tragically ironic light.

The transition from child star to grownup star is sometimes abrupt, and sometimes discomfiting or even alarming. In the case of Hayley Mills, it was a gradual process that was carefully managed. We have enjoyed her more famous work produced in the years just prior to Castaways -- Pollyanna (1960) and The Parent Trap (1961).

Growing up on screen, she had reached 16 when this film was released, and the interactions with other characters reflect some subtle-not-subtle changes. The IMDb quotes page, for example, highlights this passage:


Lord Glenarvan: [as John starts to put his hand on Mary's shoulder] Ah, there you are, my boy. Better get some sleep, you know. Got an early start.

Lord Glenarvan: Hmm. So I see! You'd better come along with me, just the same.

As if to prove that these developments were not my imagination, the following year (just after I was born), a seventeen-year-old Hayley Mills returned to top billing, in a film with the flirty title Summer Magic, which the studio marketed with the now-corny tagline:


"THAT WONDERFUL HAYLEY! a-flitterin' in a romantic whirl of her own!"

The only question that remains now is whether I will remember any of this when the Summer Magic DVD eventually is delivered!

Actually, such a thing is not needed in this case. Hayley Mills is looking for her lost father, and there is a subplot about a boy who has a crush on her. The outcomes are not exactly in much doubt. I do want to say that the typical RomCom progression plays out in a way that is both fun and revelatory of the degree to which sexism was not even noticed in film fifty years ago.

Posted by James Hayes-Bohanan at 2:24 PM