In my honors class yesterday we were discussing, among other things, alternatives to fossil fuels. Renewable or perpetual sources such as wind and solar power engender some skepticism because they are considered new and untested. In pointing out that despite some limitations and possible inconveniences, they are inherently safer that our petroleum economy, I cited recent tanker-train accidents such as the explosion last week in West Virginia, which also spilled oil into a local river.  I mentioned it in comparison to the far worse petroleum explosion in Lac-Mégantic, Quebec, in which the downtown was destroyed and 43 people were killed. 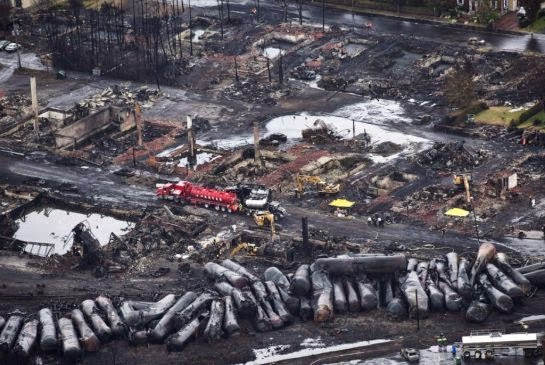 None of the students had heard of either event.

The good news is that they were more stunned than I was that two such important stories had escaped their notice. These are honors students who had signed up for a class on climate change, and yet neither of these stories had penetrated the layers of distraction in which so many of us are shrouded.

We spoke briefly about Bread & Circus -- the attention diverted to everything that is not important, as I wrote about previously with respect to Bristol Palin in 2010 and WalMart in 2013.

Atlantic reporter Derek Thompson writes that my students are far from alone in being disconnected from traditional news sources. Journalism in the Age of the Accidental News Junkie describes how social media has become both a platform and a filter for news, even as traditional reporting remains important as a point of origin.

Posted by James Hayes-Bohanan at 8:07 PM