When my university invited applications for the first TED Talks to be held on our campus, I jumped at the chance to spend 12 minutes with an audience that was deeply interested in thinking deeply about the future of our university. We were asked to talk about the university in 2040, and my first thought, of course, was to talk about our coffee situation at that time. In Coffee Bellwethers, I describe how the future of coffee relates to our campus as a community committed to sustainability and justice, and how it relates to the future of the planet as a whole.

More details of this vision are included in a Coffee Proposal that I developed with students and coffee experts over the years, but which so far has not been implemented. The proposal's Facebook page is a place to follow -- and lead -- ongoing efforts to move our campus toward a brighter coffee future.

Lagniappe
A few weeks after giving my TEDx Talk, I heard a very interesting story on the TED Radio Hour that underlines the importance of cafes in universities. In Where Do Good Ideas Come From?, Guy Raz shares Steven Johnson's insights about the importance of collaboration in the gradual accumulation of ideas, in contrast to the "Eureka" moments that are not so often important. In his TED talk, Johnson extolls the coffee house as an ideal place to foster such collaboration.

Two years ago, I was dining with colleagues in a restaurant just a few blocks from this hall. As the server brought water to our table, she hesitated as if she might know me. When she returned a minute later, she had figured out the connection, and she knew that the connection was about coffee. We had met only once before, at Logan Airport, but my face was familiar from family photographs.

This was because her daughter is a Bridgewater State College graduate who had participated in our first travel course in Nicaragua. She had learned about the geography of coffee first-hand, and had brought the lessons home. This was, in fact, not the first time that a relative of that student had brought the coffee connection to my attention. A two-week encounter with coffee and the people who grow it had changed this student’s view of the world and she had shared that with everyone she knew.
Bridgewater State University has a reputation for caring about coffee. More than a hundred of our students and alumni have made that journey to the coffeelands of Nicaragua to learn from farmers first-hand. Hundreds more have studied coffee in semester-long courses, and have shared their knowledge in community-wide coffee fairs. Many have done both.

I am here this evening because I want to make sure that in 2040 we are a campus that still has a reputation for its focus on coffee. And more importantly, that we deserve it.
But this is not JUST about coffee. For the next few minutes I want to borrow this coffee cup from the BSU of 2040. What is in that cup will tell us a lot – not just about our coffee reputation – but about our campus and the world it is part of.

Coffee will be, in fact, our bellwether. When it occurred to me to use that term in the title of this talk, it also occurred to me to make sure I knew what it meant, and I am glad I did, because I had been mistaken about its meaning. I had thought it was a nautical term, and always pictured a bell for ships, having something to do with weather.

But just as there is no X in cat, there is no A in bellwether, and it has nothing to do with rain, sleet, or even snow. A wether, it turns out, is a sheep – not the lead sheep and not the following sheep, but a member of the flock to which a bell is attached. The shepherd knows that wherever the bell can be heard, the flock can be found.

Where our coffee is, so too is our campus.
How can a cup of coffee be so important? There are three basic reasons. First, it employs a lot of people; second, it uses a lot of land; third, we consume it locally.

Today, up to ten million people make their living putting coffee in that cup. The only thing we trade more than coffee – in this whole world – is petroleum. By 2040, we had better not be trading so much oil, so coffee could and should be the most traded commodity on the planet in 2040.
Most of the ten million people who depend on coffee today are small farmers in the tropics and their families. I do not mean that the farmers are small, of course, but that they grow their coffee on farms averaging only a few acres and producing a few hundred or maybe a few thousand pounds of coffee each year.

At ten dollars a pound, a few thousand pounds sounds like it would provide a very nice living in most places in the coffee belt. But although ten dollars might be what we pay, it is not close to what most farmers earn. The costs of shipping, packaging, processing and marketing take most of the money that we pay for coffee.

Even the most free of free markets operate within a set of rules, and in coffee, those rules put most of the risk on the backs of the small producers. As with all commodities, the prices fluctuate, but coffee buyers are able to protect themselves against fluctuations by purchasing financial instruments known as futures.

In coffee, we have the opportunity to protect the small producers from some of that fluctuation, and to help them build a future. Not a paper future, but a real future.

To understand how this can be, let’s turn from the cup to the fruit. Yes, coffee is a fruit, and this is what it looks like on the tree. And yes, coffee is also a tree. Everyone who drinks from a 2040 BSU coffee cup will have some understanding of this, and will know the major steps between the field and the cup. Because of the way we will serve coffee in 2040 at BSU, they will know the geography of coffee.

In 2015, the major way to protect a farmer from price fluctuations is a system called fair trade. Small farmers organize into cooperatives, and make arrangements with coffee importers to guarantee them a minimum price to cover the cost of production and a fair income. The farmers learn a lot about the market they serve. They also cooperate in the early steps of shipping and processing, so that they can earn a little more of that ten dollars.

As a university, we have committed to the fair trade model, but we are not actively following it. Over the next 25 years we can catch up on our commitments and make sure that every farmer who sends us coffee is earning a fair living in return.

We need to challenge even that goal, though. In 2040, we should be doing much better than fair trade.
Between now and 2040 we have a chance to change the coffee market itself, and to make fair trade unnecessary. Between now and 2040, if we apply what we learn about coffee off campus to our coffee on campus, we can be a model for other North American universities and the millions of cups of coffee they serve each day.

Model cafés on our campus can connect students to the farmers more directly. And the more students know about farmers, the less they will tolerate “free” trade as it currently operates. This will make “fair” trade unnecessary as more campuses follow our lead.

The second reason that cup of coffee matters is the land. This tree is on land in the community of La Corona, in Matagalpa Nicaragua. My friend Alfredo planted it there, and his family is able to make a good living from it because of fair trade.

In caring for that tree – and growing it organically – Alfredo and his family are protecting that piece of land. They are protecting the water of their own community, and of the city below. They are also providing habitat for birds that might even migrate to Bridgewater in the spring.

At least some of that coffee in 2040 should come from this farm. But there is no guarantee that it will, because of climate change. We are talking about the future this evening, but climate change is not a future event. I am pretty certain, in fact, that the tree in this photograph does not exist. We are looking at a victim of climate change already.

Coffee farmers wanting to earn a fair living must produce high-quality coffee. And as with high-quality wine, the coffee is very sensitive to differences in soil and climate. Organic farmers care for the soil, but we have to take care of the climate, or it will not matter.

The best coffee grows at high elevation. As the temperature increases, farmers have to go higher. Even if that is possible – and it usually is not – the soil will not be the same. And even while the AVERAGE temperature and rainfall is allowing Alfredo and his neighbors to produce good coffee, the timing of temperature and rainfall is already changing dramatically. This affects yields and quality, and it also makes way for diseases. Many trees in Central America – probably including this one – have been lost to roya, a blight that has been made very common by shifting weather patterns.

Coffee lovers are fortunate that Alfredo and his neighbors have replanted them. We need to get serious about climate change now, so that coffee continues to be possible in 2040.

The third reason to care about coffee is much more local. If we still have coffee in 2040, the coffee in our 2040 BSU cup will come from farmers who have been treated fairly on land that they have cared for well. It will also come IN a cup, not FROM a cup. By that I mean that the single-serve machines that are currently filling landfills will not be present on our campus, nor will they be needed. Instead, we will have actual people preparing and serving the coffee.

A student-led café will be at the heart of each of our major buildings, fomenting conversation, teaching about coffee, and providing meaningful employment. We will be roasting our own coffee so that it is fresh, and doing so in solar roasters on some of our sunny rooftops. That technology already exists, and we have plenty of time to adopt it by 2040.

Rather than relying on vending machines, each café will provide real coffee – or tea or cocoa or juice – and real food that is as local as possible. Each café will be a place where we practice what we teach about social justice, sustainability, connections to our region, and critical thinking. The coffee cup of BSU 2040 can truly be a model for thousands of other campuses.

The last thing I will say about the coffee of BSU 2040 is that it will be delicious. When people ask me – and they often do – if fair-trade, organic coffee is as good as regular coffee, I say of course not. It is better, because if we take care of the land and the farmers and the roasters and the brewers, our reward will be in the cup. 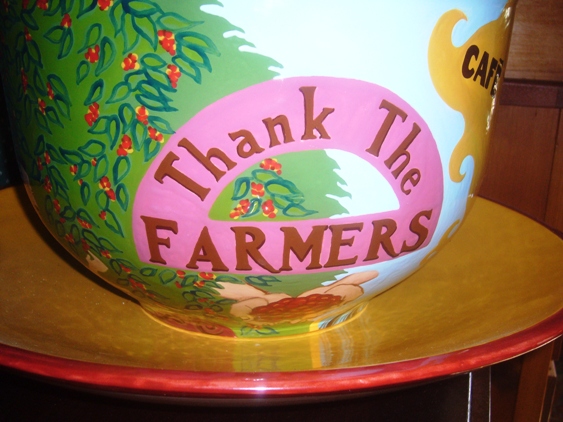 Posted by James Hayes-Bohanan at 10:42 AM