News from the "Northern Triangle" of Central America has recently been full of terrible stories of such violence and corruption that parents would rather send their children north with human smugglers than to risk keeping them at home. The United States has responded poorly at best, incarcerating many children whom scriptures, laws, and conscience would mandate we take in. 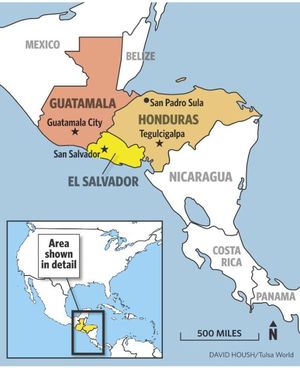 The Northern Triangle of Guatemala, Honduras, and El Salvador is a subregion with geopolitical problems distinct from the very real but somewhat less critical problems of its neighbors.

It is in this context that I was glad to hear some positive news from the region -- on the political front, no less. A failed drug war and unfair trade policies are part of the problem in the region. Corruption, though, is another common problem, and it has reached dangerous -- almost unbelievable -- levels.

And public revulsion at the extreme corruption is what appears finally to be galvanizing effective social movements across the region. As reported by The Guardian, coalitions are being formed under a broad umbrella known as Our Central American Spring. Some corrupt officials -- past and present -- are actually being held accountable as a result of recent public pressure. 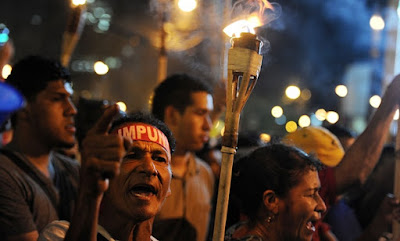 Activists and journalists are still at some risk, however, if they expose the wrong culprits. Washington is beginning to offer some support, but seems reluctant to abandon allies on the far right that it has trained and supported over many decades. See my posts With Christians Like This ... and September 11, 1973 for just a couple examples from the past, and Outsourced Horrors for a more recent example misplaced U.S. priorities in the region.  This is a time to pay close attention to the region, and to whether Washington keeps human rights at the forefront of its policy-making.

For more scholarly analysis of the current situation in the Northern Triangle, see the Wilson Center report Organized Crime in Central America.


Of course, daily life is much more nuanced -- and ultimately more important -- than political movements. Those who are interested in learning about one small corner of the Northern Triangle can read Mi Aventura Hondureña, the blog of a young friend of mine who spent the better part of the last two years teaching in a small community on northwest Honduras.

I want also to point out that Nicaragua -- though it has its share of problems, including corruption -- is not part of the Northern Triangle. The problems that Nicaragua does have stem from a much different historical trajectory, one result of which is relatively safe conditions in recent years. This has allowed me to take more than 100 students to Matagalpa, Nicaragua over the past decade, in an annual exploration of the geography of coffee. I mention this only because the geographic proximity leads many to assume that all of the countries in the region have the same set of conditions, discouraging many from experiences that would be valuable.


Posted by James Hayes-Bohanan at 3:47 PM