When leaving Bridgewater for points north, we nearly always drive through an intersection in the center of West Bridgewater (more on the historical geography of that statement in our Bridgewaters Project blog).

Traffic had become problematic as a growing number of vehicles tried to navigate the narrow, complicated intersection with inadequate turn lanes. We were therefore relieved when this became one of those "shovel-ready" projects funded by federal stimulus money.

I was in disbelief when I first saw the estimate of the time that would be required for construction, and was fascinated as we watched the entire area dug, redug, filled, and realigned over long months. One building was removed entirely so that trucks could turn safely around the northwest corner of the intersection.

The final result is a bit bewildering, and beyond the driving skills of many Bay Staters (who are not strictly interested in lane markings). It could have been made much simpler with the elimination of a few rarely-used options around the circle in the southwest quadrant. But on the whole cars and trucks can move a bit more safely and a lot more quickly through the crossing of Routes 106 and 28.

Which brings us to one geographic oddity: the bike lanes. In each direction, the engineers included an 86-foot-long bicycle lane. They are parallel to each other, between travel lanes and turning lanes. We understand that inclusion of such lanes must have been specified in the guidance documents for this new construction. But we cannot imagine how a bike could enter and then leave these lanes, unless it is magic (think Harry Potter's Platform 9-3/4) or a very special race, perhaps the Tour de Bridgewater Ouest. (Thanks to my favorite librarian for coining that.) 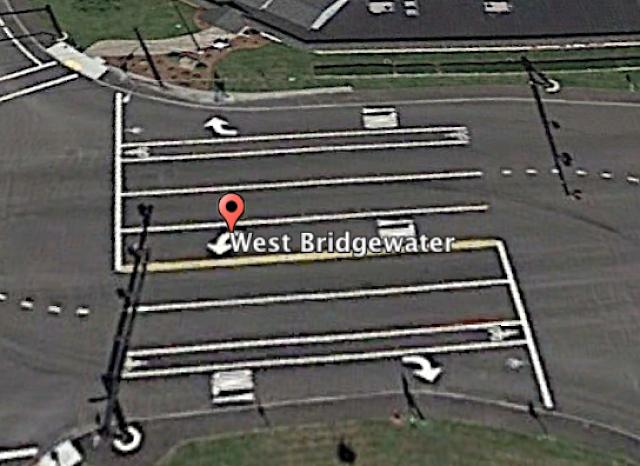 Here is the entire intersection in context -- perhaps brave cyclists will see a way through it that I cannot. For now, I'm sticking to boats for my muscle-powered locomotion.

Posted by James Hayes-Bohanan at 7:23 PM