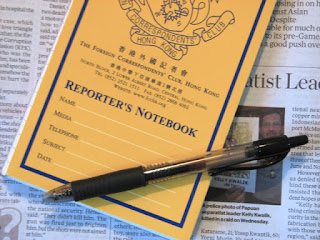 These are challenging times for reporters. As front-line defenders of democracy, they face unprecedented resistance from novice government workers who neither understand nor appreciate the purpose of their work. I was struck by this when I heard the frustrated response of the White House director to reporters concerned about the human cost of expected cuts in humanitarian aid.
I encourage readers to listen to the entire three-minute report, but this is the part that I found chilling.


MCDONOUGH: People will die. If the world does not do more, people will die.
PERALTA: In a press briefing last month, White House budget director Mick Mulvaney shrugged off the crises.(SOUNDBITE OF ARCHIVED RECORDING) MICK MULVANEY: The president said specifically, hundreds of times - you covered him - I'm going to spend less money on people overseas and more money on people back home.

Mick Mulvaney's tone is that of a bully who is exasperated by the question. I can agree with him on one thing: he is honest when he says that we should have expected this. We knew this was coming. I cannot agree with the implication, however, that brutal consequences are made somehow more acceptable by the fact that they were announced ahead of time.

The less honest part of his response, of course, is the claim that more money is being spent on "people back home." No such policies have been forthcoming. Just before this exchange, Peralta mentions a kind of aid that I used to help provide (in my very small way) when I worked for a U.S. Defense contractor. We made the Humanitarian Daily Rations that are being air-dropped in South Sudan.

Such life-savers are likely to become more scarce over time. Even the coldest-hearted and self-serving among us should be concerned about the ill will that such meanness will generate.

Posted by James Hayes-Bohanan at 5:40 PM