I was in South Carolina the day in 2000 that the confederate flag was removed from the top of its capitol building and placed in a less prominent position at the edge of the grounds. As we drove along I-95, we listened to the announcers on the local public-radio affiliate describe the proceedings in hushed tones resembling the coverage of a state funeral.  Any doubt as to what was really at stake were erased by a fellow motorist in a pickup truck, who sped along with banners flying from two large poles in the bed of the truck -- one of the Confederacy itself and one of the Confederacy's spinoff -- the Ku Klux Klan.

I was reminded of all of this recently, when I learned that the great city of New Orleans was removing four major Confederate monuments from places of prominence. I was not surprised to learn that -- as in South Carolina and elsewhere -- supporters of the 1861 insurgency were on hand to protest. But I was pleased to learn that each removal event went forward without major incident.

From the Southern Poverty Law Center, I learned of Mayor Mitch Landrieu's eloquent speech on the significance of removing those icons. The SPLC indicates that the speech is a "defense" of the action, but it goes far beyond that posture. Some did contest the decision, and he had an obligation to justify it.

He does much more, though, using the occasion to teach both some history, some civics, and some geography. The history lesson echoes the work of James Loewen in Lies Across America, who explains what monuments have to tell us about the past they commemorate, the past in which they were built, and the more recent past in which we find them. He explains that the installation of statues honoring the confederacy were part of a deliberate effort to reject the results of the civil war, and to perpetuate the harsh inequalities that precipitated that conflict -- revisionist histories notwithstanding.

The civics lesson concerns both the founding ideals of the country -- unity, equality, and the inclusion of everyone in the democratic project -- and the process by which his city worked toward realizing those ideals. His speech -- delivered with incredible clarity -- embraces individuals and institutions that were part of that process over the long arc of more than 150 years. For example, he acknowledges members of the Plessy family in the audience and the Ferguson family as participants in the process. I had forgotten most of what little I knew about that case. In reading about the 1896 Plessy v. Ferguson decision today, I was reminded that the deplorable "separate but equal" decision was based in New Orleans. I also learned that Ferguson's error had been justified in part on a much earlier case decided in Massachusetts. Most importantly, though, descendants of both sides were recognized as part of the reconciliation process that led to the removal of the Confederate statues.

The geography lessons begin with a sweeping description of the diversity of the New Orleans community, which has been an essential hub in many civilizations over the past several thousand years -- and he ties all of this to jazz! At a finer scale, he makes clear why removing these symbols of a barbaric past is essential to unity in the present. He explains how the removal of the pernicious statuary is essential to creating a landscape that reflects the greatness and diversity of the New Orleans community. 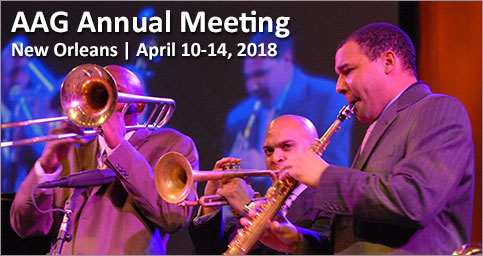 All of this is very timely for geographers. The 2018 Annual Meeting of the American Association of Geographers will be meeting in New Orleans. My department's EarthView team will be there with our giant globe -- both at the conference itself and (we hope) in at least some nearby schools. I learned of the mayor's speech on the same day that the AAG and other leading geography organizations announced that the them for Geography Awareness Week (November 12-18, 2017) will be civil rights. Landrieu's speech will certainly be part of my teaching that week!

I just learned that the mayor of Baltimore is considering the removal of public statues honoring Generals Lee & Jackson (who of course were the military leaders of the insurgency) and Supreme Court Justice Taney, who penned the odious Dred Scott decision. Anticipating fiscal objections, Mayor Pugh suggests that the statues could perhaps be auctioned, which it seems to me could create unintended complexities. An apologist for the Confederacy is indeed quoted in the story, blithely citing the cost as an objection. This is certainly a facile way to object to Mayor Pugh's suggestion without addressing the very real questions so eloquently examined by Mayor Landrieu above.

Baltimore's previous mayor had interpretive signs added to the statue of the generals. The Taney statue is located a mile south of the spot where I was married.

Posted by James Hayes-Bohanan at 7:17 PM