As I have written in this space before, Sandy Tolan's novel* The Lemon Tree has been among the most powerful works I have assigned to my students. In my survey course The Developing World, I assign it to complement the traditional textbook chapter on the Middle East. I intended to assign this only once -- during the semester that it was our town and university community read, in which Mr. Tolan visited our campus. But the writing that resulted from this assignment was among the most thoughtful writing I have seen from my students, so I have continued to assign it.

The conflict over Palestine is one of the most important for U.S. foreign policy, but one that is little understood by most U.S. citizens, and understood in only the simplest terms by most of the rest. It is, of course, a conflict with a complicated geography and a complicated history, and both have implications for daily life in the West Bank and throughout the entire region. So while a few students have resisted this assignment -- because it is complex or because it challenges deeply-held assumptions -- many more have thanked me for it. The novel is beautifully written and delicately balanced. 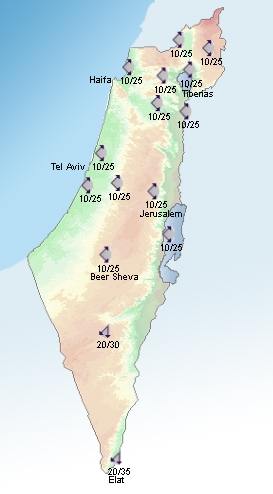 Two good places to start, I think, are the Encyclopedia Britannica West Bank article and Greg Myre's blog post about the efforts of 10 U.S. presidents to broker a lasting peace. His post includes a brief video in which Myre outlines the broad implications of the war for the U.S., Israel, and its neighbors.

Next, I suggest Dan Efron's report on the lack of historical understanding of the basic facts of the 1967 war; many in Israel are not aware that the settlements in the West Bank are contested. He argues that blurring of the lines is part of a deliberate effort to make the de facto settlements more difficult to reverse. Whether it is deliberate or not, his reference to weather maps is certainly correct. This image from today's official weather report gives no indication that the lands shown are anything but Israel proper.

All of this is by way of preparation for the two reports that reminded me most directly of Tolan's work. They are first-hand profiles of two men with connections in both the West Bank and the United States, one Jewish and one Palestinian.

Omar Omar was a young man studying abroad when the war took place, and though his family was in the West Bank, he was not allowed to return for many years, and instead moved to the United States. His story includes a fascinating chance encounter with a U.S. client after he did eventually return.

Conversely, Ephraim Bluth was a college student in the U.S. during the war, and decided to move to the West Bank in order to participate actively in securing Israel as a Jewish homeland.

For more background on The Lemon Tree, see the introduction and excerpt that were published on the PBS Frontline web site shortly after its publication. I also cite Tolan in my 2012 article Cool Arab Autumn and my 2017 Bilingual Street article.

*novel: Two books that I regularly assign to students are described by their authors and publishers as novels, even though they are based on thorough research of the lives of actual people. I consider both books -- The Lemon Tree and In the Time of the Butterflies -- to be reliable sources of insight and information about their subjects, though their designation as novels does give me some slight discomfort.

Posted by James Hayes-Bohanan at 2:53 PM