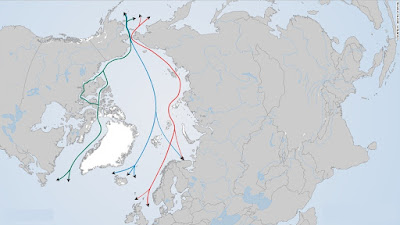 For many international shipments, the routes shown above are far shorter than alternatives that would pass through the Suez Canal as they circle Asia to the south. These routes have historically been quite difficult, though, being impassable in cold months and requiring massive icebreaker escorts in warmer months.

This has now changed, according to a report from CNN Money, which presents melting Arctic ice as a new opportunity presented by climate change. The Russian tanker Cristophe de Margerie has traveled from Norway to South Korea in 19 days, the first ship to make such a journey without an icebreaker in front of it. It is a sign of many more such voyages to come.

We know from the study of climate justice that the consequences of climate change accrue very unevenly -- so unevenly, in fact that people in some regions or economic sectors are actually experiencing benefits.

The problems of melting Arctic ice are many and are well documented. This story about shipping brings to mind three kinds of feedback associated with the ice loss:

1. Fuel saved by shorter transit times will reduce carbon loading and slightly slow overall warming.
2. Greater access to fossil-fuel deposits will likely add to carbon loading in much greater amounts than these savings.
3. More important than either of these, less ice means lower albedo (surface reflectance) and therefore much greater warming, regionally and globally. This feedback loop is already in effect, and accounts for the heretofore unimaginable rapid rates of ice loss.
Posted by James Hayes-Bohanan at 8:25 AM