These Cartographers Are Animals

My title is not exactly correct, but I could not resist. Skilled humans combined art and geotechnology to make the maps based on animal movements in Where the Animals Go, an award-winning collection of 50 maps published by James Cheshire and Oliver Uberti.

In her review The Science and Art of Mapping Animal Movements, public-radio journalist Barbara King describes some of the varieties of approaches taken to the maps, and the ways in which they yield results that are at once scientifically valuable and aesthetically pleasing. 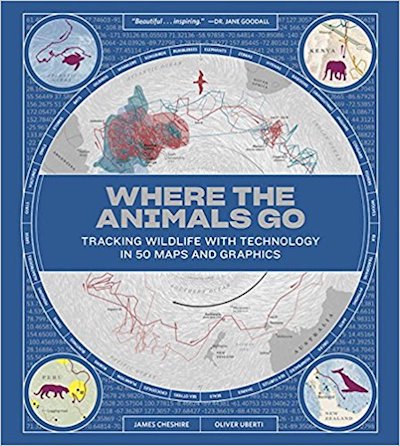 The combination of art with technology is trending in education circles as "STEM to STEAM," which refers to adding Art to Science, Technology, Engineering & Math (STEM -- itself an educational fad that was made necessary by misguided reforms that reduced focus on these subjects). To which geographers back to Ptolemy say, "We were doing STEM to STEAM before it was cool!"
Posted by James Hayes-Bohanan at 8:20 PM