Congress has finally gotten around to doing something about sexual harassment by its own members, but true accountability remains elusive. In an unusual act of decency, the usually unprincipled Speaker Paul Ryan named a commission to expose, among other things, the heretofore secretive practice of using public money to settle claims by victims.

The work of the commission soon exposed one of its own members, Rep. Patrick Meehan (R-PA). It is not clear whether he simply hoped that the commission would not be bright enough to discover his transgressions, or whether he volunteered for the post in an effort to keep covering his tracks.

I first noticed the story because of Adam Peck's reporting on Meehan's convoluted rationalization, which included blaming President Obama's healthcare legislation. One phrase in Peck's report piqued my geographic interest, though. I decided I needed to learn more about his "heavily gerrymandered district to the west of Philadelphia."

Pennsylvania's 7th District, which NRP reporting describes as "suburban Philadelphia" nearly surrounds the City of Brotherly Love, carefully avoiding its left-leaning neighborhoods. Encompassing carefully selected neighborhoods in five counties and in the direction of the four winds, the district is considered one of the ten most egregiously contrived districts in these United States.
This contorted shape of District 7 is the embodiment of what is wrong with extreme gerrymandering, which undermines both the Preamble and Article 1 of the U.S. Constitution, which was written in a space encircled by -- and excluded from -- this particular district. 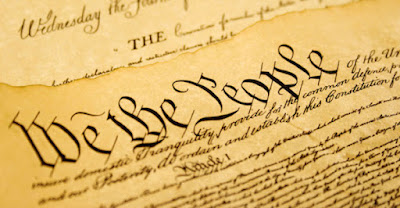 The story broke just as Pennsylvania's highest court joined a number of other courts around the United States in rejecting voting districts that have clearly been contrived so that politicians could choose their voters, rather than risk the reverse. As I have written previously, gerrymandering was invented in Massachusetts almost immediately after the Constitution was ratified. It has been employed by politicians of many stripes throughout the history of the Republic, but never with the sophistication that has been brought to bear by malfeasant geographers in recent years.

It is just one part of a multi-pronged approach to voter suppression that journalist Ari Berman writes is being used quite effectively in combination with dark money and voter-ID laws. Only in such an insulated environment would a person of Rep. Meehan's caliber have the audacity to run for re-election.

Voter suppression efforts are not limited to the drawing of boundaries, of course. In North Carolina, arcane rules about the composition of local election boards were designed to give incumbents an advantage in choosing who would likely show up to vote. The rules did not strictly exclude any particular voters, but a court agreed that they were contrived to push turnout in a predictable direction. The geographic argument here is subtle but persuasive -- see the bar charts in the map below, depicting driving distances to polls under different scenarios.
Still More...

In a May 2014 article, journalist Christopher Ingraham wrote about some of America's most gerrymandered districts, and described some of the counterintuitive goals of what he called "crimes against geography."

Posted by James Hayes-Bohanan at 9:08 AM