From Schoolhouse Rock and whatever amount of civics classes have survived the regimes of high-stakes testing in our schools, many of us have gained the impression that in the United States, voters choose their politicians. If we have a more sophisticated understanding, we understand that the first draft of the Constitution disenfranchised most of the population, but that amendments expanded the franchise, first by race and then by sex. We might remain (rightfully) cynical about the manipulation of voters and by the insidious advantages of incumbency, but we think of the general direction of influence to be:

Frequent readers of this blog will know that I have written quite a lot about the pernicious effects of gerrymandering, a way of manipulating district boundaries to gain partisan advantage, so that the selection process is reversed:

I encourage those with curiosity and perhaps insomnia to browse all of my gerrymandering posts (this link is chronological and will include this post). 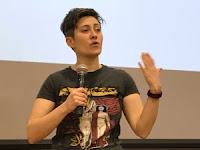 More importantly, though, I want to point to two outstanding resources about the brilliant people -- teams combining mathematical, statistical, legal, and geographic expertise -- who are fighting back. And it is a fight, especially in Pennsylvania, where some state legislators are defying courts at all levels, setting up a constitutional crisis that borders on a coup d'état in my opinion.

The first of these is the Metric Geometry and Gerrymandering Group at Tufts University, led by Dr. Moon Duchin (shown left). I learned of the group when our BSU Department of Mathematics arranged for her recent visit to our campus. She took time out from a very busy day of working with the governor of Pennsylvania to present a talk entitled Math, Data Algorithms, and Voting Rights. She explained her group's very sophisticated approach to the problem of demonstrating that a given pattern voting districts is unfair in a statistically significant way.

She is an ideal spokesperson for this work; in just an hour she presented her group's approach in a way that was simple enough that students with no prior background in the subject understood her, but sophisticated enough that I now understand the problem at a much higher level. And I can tell that there is a lot more to learn! Writer John Winters of our own University News team in turn did an excellent job of capturing the key ideas of her presentation in the article I cite above.

For me, the greatest take-away from Dr. Duchin's talk was the idea that mathematicians can generate millions of alternative districting maps and compare any given map to that population of possibilities. This method definitively identifies schemes that are contrived for partisan benefit. We also learned that the benefit is up to 2x a party's actual vote share. That is, the theoretical maximum number of seats a party can gain by manipulating the maps is two times their share in the population. A party with a 30-percent share of votes can win 60 percent of seats, and a party with 50 percent or more can get ALL of the seats.

This leads to an excellent article that explains the Pennsylvania situation in some detail. Wired journalist Issie Lapowski's profile of The Geeks Who Put a Stop to Pennsylvania's Partisan Gerrymandering is a cogent lesson on the interactions of geography, history, politics, law and mathematics in this sordid and important story.

Today a U.S. Supreme Court whose 5-4 majority was made possible only by the racial bias of Sen. Mitch McConnell upheld race-based gerrymandering in Texas, by that 5-4 majority.

Posted by James Hayes-Bohanan at 11:24 AM