Those who protest (sometimes violently) against common-sense measures to protect public health during the Coronavirus pandemic are attacking the immediate cause of the severe dislocations they are facing: mandates from state or local government. But what really should concern them are much deeper patterns. Short-term measures to protect public health are merely exposing deep fault lines that have run through our society for some decades; it is not difficult to imagine a world in which the same stay-at-home measures would not cause such immediate and widespread dislocation.

In an interview with environmental journalist Steve Curwood, author (and one-time BSU visitor) Michael Pollan explains this with remarkable clarity in a 14-minute radio segment entitled Coronavirus Shocks US Food System. He describes the disconnect between two geographies of food in the United States: that of grocery stores and that of food service (such as restaurants and schools). 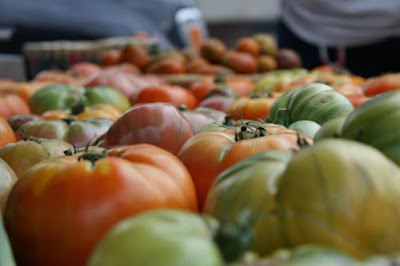 Spoiler alert: he mentions a third, much more resilient segment as well. He cites several examples of local food networks that have found ways to adjust distribution patterns -- away from restaurants and toward farm-box subscriptions, for example. This corroborates recent reporting from Australia, where planners have found that suburban sprawl has made Melbourne more vulnerable -- both to food-supply disruption and to wildfire.

All of the above has to do with what is available in the food system; sadly, another dimension of the crisis is the rapidly growing number of people who cannot afford food even if it is for sale at relatively low prices. Since the 1980s, social safety nets have eroded along with wages; a great number of people in what many still call the wealthiest nation on earth (it is not) cannot afford to eat if they miss a paycheck.
As of this writing, the Federal government has authorized $9,000,000,000,000 that is called "stimulus" or "relief" but which is not targeted at those who most urgently need it. The result is a shockingly rapid surge in those seeking relieve at through local food banks, as documented by Mother Jones in mid-April.

Posted by James Hayes-Bohanan at 3:05 PM