Mario was the beloved custodian of our church when we lived in Tucson in the 1980s. His previous employment had been as a school principal. Both are honest and honorable positions, but it is reasonable to suppose that something went awry that prevented him from working in his chosen profession. That something was an international move, in his case from El Salvador to the United States. I do not know the details of Mario's crossing, but as I wrote in my 2009 Just Like Arlo post, our congregation has long been involved in providing humanitarian assistance to refugees and other migrants, including many who were fleeing El Salvador in the 1980s. 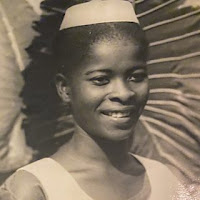 I was reminded of Mario by the latest episode of BBC Witness History, in which Dr. Cecilia Anim describes a career in nursing that began in Ghana and continued in England. Unlike Mario, she migrated freely rather than as a refugee. But like Mario, the move resulted in a de-credentialing. I recommend this 9-minute history lesson for those tempted to make assumptions about their neighbors who have migrated from afar. I also recommend the more recent story of Dr. Onyema Ogbuagu, a Nigerian-born doctor who helped to develop a Covid-19 vaccine.

Before I thought of Mario, however, I thought of the nurses who cared for my mother in her final days, which spent last July in a nursing home in Annapolis. Many members of the staff were originally from Nigeria, Ghana, Haiti or other countries in Africa and the Caribbean. Among these men and women -- who are often derisively called "the Africans" in online reviews of the facility -- was a nurse from Nigeria who went to my mother's room just a few minutes after seeing me leave for the last time. It was in Nigeria -- almost next door to Ghana -- that she began to prepare for the care she provided to my family.

The deflation of professional credentials across borders is not limited to migrations from the global South to North. I have seen the credentials of education professionals from western Europe dismissed in the United States, and those from one state not accepted in another.

Posted by James Hayes-Bohanan at 12:28 PM