SPOILER ALERT: This story was in the news and this blog post mentions a few surprising details.

Operation Varsity Blues is a compelling drama that focuses on one real-life criminal -- coolly played by Matthew Modine -- while uncovering layers of scandal that have come to define higher education in the United States.

Not to be confused with the 1999 Jon Voight film with a similar name (which I have not seen), this 2021 film -- subtitled The College Admissions Scandal -- is a dramatized documentary that tells a contemporary story with many onion-like layers of wrongdoing.

The focus of the story is Rick Singer, a college-admissions consultant who provides a "side door" for college admissions to wealthy parents who do not trust the front door of normal admissions processes and cannot quite afford the back door of 7-figure donations. Singer uses a combination of bribes, donations, and falsified records -- mainly athletic -- to help the children of his clients get admitted to colleges that might have been out of reach.

Many of the young people involved were to varying degrees unaware of what was being done on their behalf. They were even less aware of the low regard in which their parents held them. Singer has as much contempt for his co-conspirators. As the film reveals, this racketeering investigation worked in the opposite direction from most: once the head of the conspiracy was identified, he quickly cooperated to give up all the others. Each engaged in less criminality than Singer (who sang like a canary) but they were much better known than he. This may have been attractive to prosecutors.

Soon after watching this, I listened to the Radio Open Source Back to School episode, which explores some of what I see as much more important problems surrounding the Varsity Blues case. The film and widespread media coverage identify some of the villains: parents and school officials playing games with high-stakes admissions decisions.

As someone who has been in public higher education for four decades, I have met hundreds of educators and thousands of students. I would not argue that there is no difference among institutions, but I would argue that the variations within a student body are greater than the variations among them. Education is what students and faculty make of it, full stop.

Looking back on this film, I wish I had counted the number of times the words "teaching" or "learning" are used. These are not the values that motivate the people involved in this scandal. Increasingly, they are no longer the values -- if ever they were -- that motivate those who govern (external boards) or manage (internal administrations) education at any level.

Sadly, however, the value of education for its own sake is increasingly ignored in policy circles, even within universities. 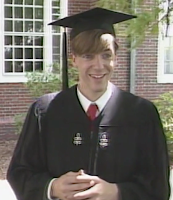 In a recent issue of the online magazine Truthout, for example, journalist Eleanor Bader writes that Colleges Are Using COVID as a Pretext to Make Draconian Cuts to the Humanities. The destruction of teaching and learning is presented as a fiscal necessity, but is in reality a shift in values that uses the codeword "workforce" to suggest that learning is valuable only if it can be monetized.
That attitude is a far greater threat to education than are all of the Felicity Huffmans of the world.

I admit that my scorn for the parents is enhanced by the fact that I am a geographer in a country whose well-known ignorance of geography can be attributed in part to some of our most "elite" institutions. The tale is too strange to be plausible fiction; I tell it in my 2016 post Geo Veritas.

On September 17, WGBH journalists Sean Corcoran and Kirk Carapezza discussed the opening of the case as it finally enters the trial phase in Boston. The audacity of the defendants is astounding, as is the depth of the poor parenting involved. Education is not a genuine concern of any of these people.

Posted by James Hayes-Bohanan at 3:16 PM