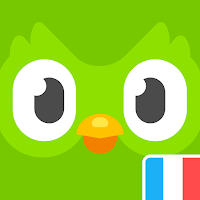 As reported in the New York Times (really, it was), I met the love of my life in French class over 35 years ago. The reporter kindly glossed over the fact that I was a terrible student in that class, barely showing up often enough to have met anyone.

A silver lining to this pandemic period has been that I made the time to return to those French lessons, via the Duolingo phone app. That silly chouette verte has ... by insistence on daily lessons ... brought me to a reasonable level of ability over the past 462 consecutive days.

These are like podcasts with training wheels -- in the French version, each story is introduced in English with enough intermittent commentary in English to keep a language learner listening. It is easy to repeat a passage or to read along in a transcript. The stories are told by a great variety of speakers from different parts of the francophone world, and I have found a lot of the stories quite engaging.

Among these is Episode 43: Une visite guidée du Paris noir (A Tour of Black Paris), which has particular appeal to me as a geographer. It is in fact, the first podcast episode I have found here or anywhere that comes with its own Google map. I was happy to see this, since I create my own Google maps for blog posts, lectures, or even family vacations.

The beauty of these maps is that they are dynamic -- while listening to the podcast, listeners can pan, zoom, use Street View or explore photos and web sites others have attached to the Paris Noir map. Each of the five featured locations includes the author's notations and a timestamp to find one's way back to the corresponding section of the audio.

This is a static image I grabbed from the map to help draw attention to this post and also to point out one bit of geographic nomenclature that is mentioned in the story but not explained. The Left Bank is a widely-heard term for an area of Paris that includes the Latin Quarter, the Sorbonne, and all of the places mentioned in this tour. On any river, the left bank is the area that would be to the left of the river from the point of view of a vessel moving downstream, and the right bank is the opposite. From this one can surmise that the Seine flows from southeast to northwest across this particular scene; explore the dynamic map to follow it from its sources and to the sea. 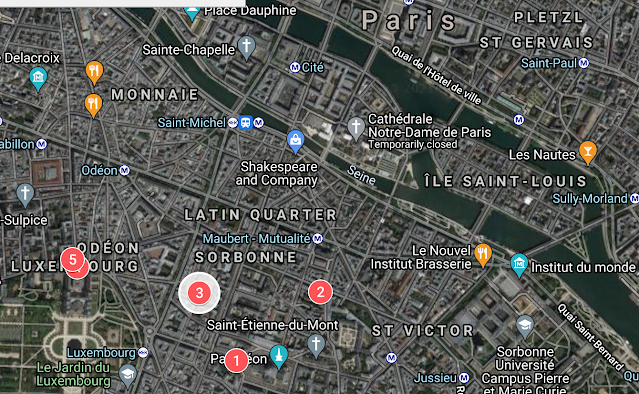 The tour mentions a lot of interesting details about people and places in Paris itself, of course, and also draws attention to a couple of broader ideas. One is the idea of metropolitan France; in some contexts, the word "metropole" refers to any of the European places that were the seats of empires. It is essentially the opposite of colonies. But Métropole can refer more specifically to continental France, since many former colonies are today part of the Republic. Listeners to the Duolingo podcasts are introduced to many speakers who are from the areas of the Republic outside of the continent as well as former colonies that are fully independent but still connected by history, migration, and familial ties.
The episode also explores blackness and négritude as identities that listeners in the United States might -- and do -- confuse with African American identity. An important chapter in the history of 20th century black identity, of course, is the role of Paris as a refuge for black artists and intellectuals from the United States, such as Duke Ellington and James Baldwin. As the Coffee Maven, I cannot help but notice the central role of cafés in this part of the story.
Silver lining: Because of the global pandemic, our plans to visit Paris in 2020 were postponed and then canceled. But I've been working on the language, and the European tour we planned around a family wedding is going to happen. As disappointed as I am about the delay, I am glad I learned about this tour before we eventually go. We will definitely take Kevi Donat's full tour, and meanwhile I will follow him on Instagram.
When I go, I especially look forward to Café Tournon. Even though Duke Ellington was born in the same hospital as I was, though he and I were not on the same floor. We were separated both by decades and by Jim Crow. In Café Tournon and the rest of Paris, he was free to sit wherever he cared to.
Lagniappe
I recommend this whole series of podcasts to anybody who understands a little French, even if they do not need the language practice. Another recent favorite is Changer du Camp (Switching Sides), the story of a young man from Cameroon who studied geography and used it to make a real difference for the world's palm forests.
Posted by James Hayes-Bohanan at 5:15 PM