This post is a bit longer than usual because I am both describing a recent teaching collaboration and including the thoughtful work that our students produced. Because the post is rather long, I am going to open with the conclusions -- what some might call the take-away findings.

DRAFT -- as of May 13 in the afternoon, this post does not yet include student work. Please return later today for full information about this project.

This post elaborates on a presentation my geography colleague Dr. Boah Kim and I presented at the BSU-CARS Symposium in May 2022. We were among faculty members from several departments who were describing our recent experiences in several parts of the world with Collaborative Online International Learning, or COIL. Specifically, we reported on our COIL experience with colleagues at TEC-Monterrey in Mexico.

These have been important, life-changing experiences for the students involved and for me as a professor. They often have ripple effects on other students and on the family members of the students who participate.
Despite our best efforts, however, only a tiny percentage of the students I teach have had experiences of this kind. And because of an extended global pandemic, I am on an involuntary hiatus from such experiences myself. I am grateful that I traveled with students in January 2020, but it will be at least May 2023 before I do so again!
Enter COIL -- Collaborative Online International Learning, a concept well described by its name and more fully elaborated on the website of SUNY COIL, one of the institutional leaders in this kind of programming. I was intrigued by this concept when I learned of it from some of our campus leaders in international programs in the depths of the pandemic. I explored the COIL concept with colleagues with whom I had developed some of the successful programs described above, but we did not find a way to make it work.

In early 2022, I received a more specific invitation: to develop a COIL project with potential partners at TEC-Monterrey, a private university in northern Mexico with deep experience in the approach. We soon formed a team involving two TEC faculty in a planning/architecture program and two BSU geography professors.
We situated the collaboration in my upper-level course Latin America: Globalization & Cohesion. The course was well underway when we began planning, so I had to adjust my syllabus and assignments considerably to make the COIL possible. I decided that the only way to make the experience worthwhile -- especially as it came near the end of an exhausting academic year -- was to give the project plenty of space to succeed. By this I mean that I decided to devote class time to it and to reduce other planned assignments. 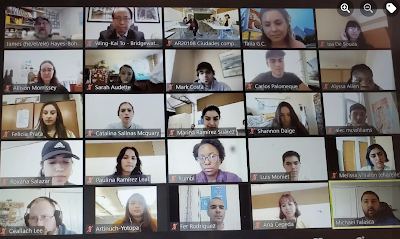 The TEC professors had previous experience with these international collaborations and they had administrative support that was very helpful in structuring the project we did together. The project structure had several key components:
The course in which this work was situated is a broad survey course; a collaboration on environmental, cultural, or political geography would have been viable. But since the focus of my collaborators and of the TEC-Monterrey students is urban studies, we made that the focus of our projects. Specifically, Dr. Kim introduced the use of the SWOT (Strength-Weakness-Opportunity-Threat) concept to analyzing urban places and planning. Fortunately, three of my students were in her urban planning class, and a fourth member of that class was able to join our collaboration.
We formed three student groups of equal size, with equal numbers of Monterrey and Bridgewater students in each. All of the Monterrey students applied SWOT analysis to an area of Monterrey itself. The Bridgewater students did the same with three different nearby urban places: the cities of Lowell and Brockton and the Boston neighborhood of Dorchester. The level of familiarity with these places varied considerably, so there was a lot of learning required about places close to home. This was fitting, though: in all of the international programs I have led, people learned something about their homes.
The students spent about two weeks applying SWOT to two aspects of these places: mobility and demographic makeup.
Student Work and Reflections   (more being uploaded soon ...) 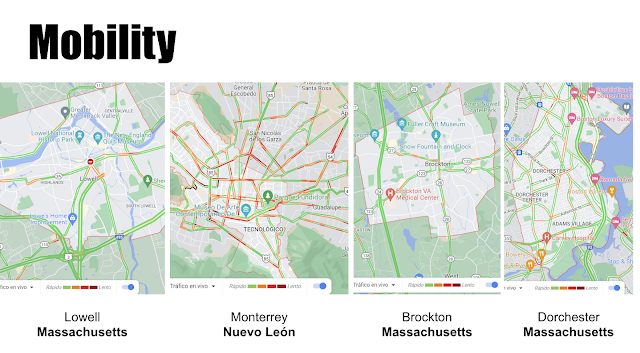 After comparing mobility in their communities through a SWOT lens, each group created an infographic to summarize those comparisons. Each group developed its own format, as seen below. Each infographic is a bit too big for this blog screen; please click each to enlarge. 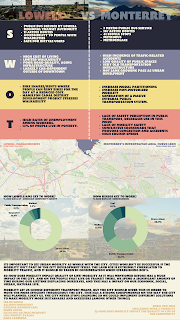 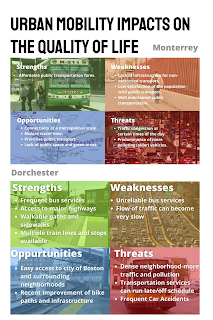 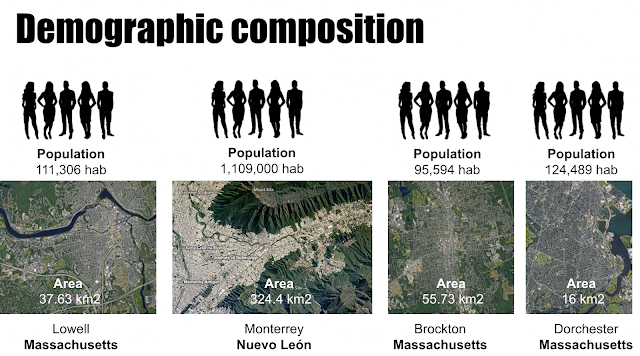 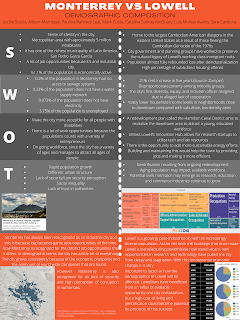 The rest is coming soon....
Posted by James Hayes-Bohanan at 2:25 PM