During my first or second visit to Brazil -- it would have been 1996 or 2000 -- I remember starting a little debate among a small group of students and faculty in Porto Velho by asking a simple (it seemed) question: "Can a person drive from here to Manaus?" which is about 600 miles to the northeast.

Half of the people present said yes, because you could take BR-319. The other said it was impossible, because that highway exists "only on the map." Both answers were correct in their own way. Two decades later, Google Maps is not ambivalent at all: get started before breakfast and you could be there by bedtime.

The reason for the debate, of course, is that roads paved in the Amazon do not remain paved for long. Often carved into an undulating terrain with almost no surveying ahead of construction, steep slopes, poorly structured clayey soils and extremely heavy rainfall make pavement little better than gauze over time.

This all came to mind today, as I listened to a report on the paving of this very road by John Otis on NPR. The condition of this road is of international interest as the presidency of Brazil is being decided in a run-off election today. As Otis suggests in his reporting, while the previous incumbent -- the once-and-future Luiz Inácio "Lula" da Silva -- has equivocated on the question, while the current incumbent -- Jair Bolsonaro -- is firmly committed to the repaving of BR-319.

As with other aspects of national policy regarding the Amazon rain forest, the choice is between ineffective protection and very effective exploitation. Within an hour of my posting this story, we expect to which direction the voters of Brazil are taking. And within an hour or two of that, we will know whether the voters will be heeded, as Bolsonaro is hinting that he might ignore the results, as his friend to the north attempted on January 6, 2021.

Update: On November 5, NPR journalist Carrie Kahn detailed the outcome of the election I had been awaiting when writing the above. It took a few days, but Lula won and the incumbent eventually stopped contesting the win. Kahn's reporting describes that win and the importance of the Amazon among Lula's challenges. UPDATE: On November 16, Kahn reported on Lula's stunning appearance at the climate conference in Egypt, which he attended instead of the sitting president.

The last academic conference I attended before the Covid lockdown was in Porto Velho, where I was invited to speak on the acceleration of deforestation there. The conferees were interested in hearing my insider/outsider views. My talk was called Fogo, Política, Bife, y Soja -- Fire, Politics, Beef, and Soy -- because they are all connected. 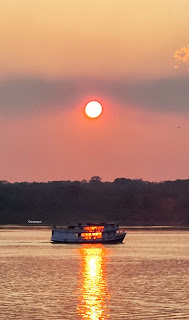 The story mentions Dr. Philip Fearnside, the first person I met in Brazil and still one of the forest's most ardent academic advocates.

About a week after posting this story, a geographer/librarian friend shared another story from the Amazon -- this an encouraging story of discovery in an area far from any roads, in the easternmost part of the rainforest. I introduced the story in Towering Emergent.

The photo is by the amazing Ocampo Fernandes, posted in the online group Rondônia, Minha Querida Rondônia.

Posted by James Hayes-Bohanan at 3:51 PM