The Geographer and some geographers

Jan Vermeer was a Dutch painter of the 17th Century who is a bit of a hero to geographers for this work, known simply as "The Geographer," which depicts a geographer in a moment of insight as he pores over a map, surrounded by maps and a globe.

Of course, I've always been interested in this painting because of the belief -- conceited, perhaps -- that Vermeer's geographer looks a lot like a particular contemporary geographer, shown on the left here:

Yes, that is Dr. Hayes-Boh, before he was a Dr. or a Hayes, shown on Keuka Lake with honorary geographer Pamela, before she was a librarian or a Boh. Most people recognize Pam in this photo much more easily than they do me!

When looking at this with our geography majors yesterday, we noticed another resemblance. Vermeer's geographer, poring over his map, put several of us in mind of Katie Spotz, shown below preparing for her recent voyage across the Atlantic. 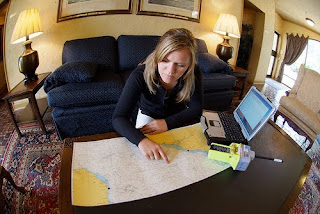 Her Row for Water project has been an inspiration to hundreds of our EarthView students this year.

Posted by James Hayes-Bohanan at 7:15 AM